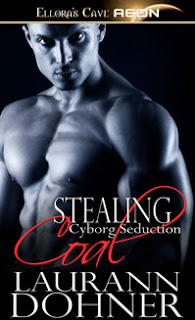 Jill has learned the hard way that men can’t be trusted and sex only causes pain. In the lawlessness of space, women are a sexual commodity—to be used and abused. She’s doing a man’s job, with only her father’s brutal reputation and three androids to help keep her alive when she sees a massive, handsome cyborg chained to a freight table. The abusive crew plans to sell him to fight in gruesome death matches. It’s stupid, it’s insane, but Jill can’t leave him to such a horrible fate.

Coal has survived being a captive breeding slave and irreversible damage to his cyborg implants, but his honor is still intact. He’s grateful Jill saved him and he’ll repay her the only way he can. He’ll fix her—with his mouth, his hands and his body. He can teach the little human just how much pleasure she’s capable of feeling.

Stealing Coal by Laurann Dohner took me on a sci-fi adventure. I’m new to the science fiction genre of romance and am very glad I chose to read this story. From the world build to the characters, I was a goner.

I enjoyed Jill’s vibrancy and her strength and felt bad for the raw deal she’d been given in life. I couldn’t imagine being alone in the universe with no one to talk to besides trusted artificial beings. That being said the artificial beings amazed me, so life like, even in their ability to process and make their own decisions I adored them.

Jill is a beautiful heroine, knowing Coal was in eminent danger; she broke the law and listened to her integrity to give him freedom.

Coal intrigued me. After so many years of abuse, and of others using him, manipulating situations to gain what they wanted of him, I wanted to cry. I was amazed it didn’t break him down but instead his anger fuelled him on. Not one to wallow, he delivered his own verbal messages.

He and his kind were priceless. Oh when he gained control, I sat back to see just what he could do. His tenderness and his decision to pleasure Jill, come hell or high water, made me giggle. It was apparent she couldn’t formulate a way to dissuade him from his goal and I’m glad she didn’t. From there the story erupted into kick ass fast paced action. Passion. Action. Hot man. Equally hot woman. Hot robots. What more can a reader ask for? Oh, death and dismemberment of all assholes perhaps? This story was a great read and one I won’t mind reading again.