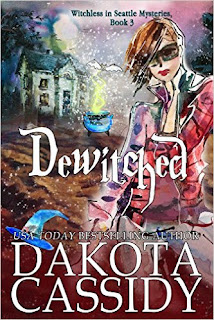 "It's nice to meet you, Mr…er, stage, screen, and Japanese film star, but party…and thirty-two years, actually almost thirty-three now. And um, stuff…to do… So, talk later. I mean, you and me. M'kay? Gotta go."

Ebenezer Falls, sleepy fishing village or murder central? The game's afoot in Dewitched from USA Today bestselling cozy mystery author Dakota Cassidy as Stevie, the powerless witch (or is she?), her bat familiar Belfry, and resident British ghost spy Winterbottom, hunt for a killer. Book 3 of the Witchless In Seattle Mysteries is a thrilling whodunit, and this time, it's personal!

I, ex-witch Stevie Cartwright, do hereby solemnly swear to avoid future murder-mystery shenanigans, nosiness, tomfoolery, and any further crazy killer inflicted pain to my person, so help me goddess…

Hah! Like I could help myself? But after busting my butt (literally!) on the last murder case in my beloved hometown of Ebenezer Falls, WA, I could use a nice long break. I was determined to take the time to enjoy the company of my bat familiar, Belfry; my British ex-spy ghost, Win; our adorable St. Bernard rescue, Whiskey; and of course our gorgeous home, Mayhem Manor, freshly and lovingly renovated.

Until shazam—a dead man invites himself to our fancy housewarming party! When my mother's husband number five ends up deep-sixed in my parlor, it's not like I can't NOT try to solve this mystery, right? Especially if I ever want Mom to leave so I can get back to my semi-peaceful existence.

But our work is definitely cut out for us this time. With Belfry's rascally bat family visiting and the two hundred or so guests, acrobats, mimes, cooks, catering staff, orchestra members—and a surprise guest who throws me for a loop in the house—suspects sure aren't a problem.

Looks like it's time for another spirit-filled, witchless adventure in Ebenezer Falls!

This cozy mystery has a complete cast of oddball characters from witches to ghosts and bats to psychics. Witchless In Seattle Mysteries is a spin-off of Dakota Cassidy's bestselling paranormal romance series, A Paris, Texas Romance.

Dewitched is a smashing good read!  It starts out with a bang and the fireworks just continue throughout the book.  There was non-stop action and sleuthing on Stevie’s part.  She is accompanied by her ghost spy, Win, as she tries to solve the murder before another innocent is sent to jail.  The reader is treated to plenty of surprises in this third book of the series.

Readers finally get to meet Stevie’s mom the illustrious and illusive Dita Cartwright.  Dita’s part in this plot adds spark and controversy galore.  Belfry’s family drops in for a visit and adds to the chaos that is Mayhem Manor.

This is a not to be missed addition to the Witchless in Seattle series.  The story can be read as a standalone, but you will get more out of the adventure if you have read the previous books.  Dewitched also adds to the series and builds up to the next book.

Dakota Cassidy does a wonderful job of creating fun characters in a story tied together with humor and adventure that will have you glued to the pages. 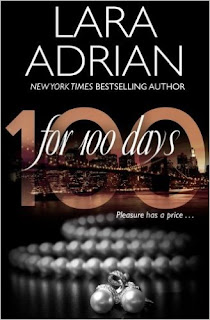 Struggling artist Avery Ross is barely scraping by. Bartending at a trendy New York City restaurant for an overbearing boss and two weeks away from losing her apartment to a condo developer, she's desperate for a break. So when she's offered a temporary housesitting job, she takes it.

Living at one of the poshest addresses in Manhattan is like entering a new world--one that catapults her into the orbit of billionaire Dominic Baine, the darkly handsome, arrogantly alpha resident of the building's penthouse. What begins as a powerful attraction soon explodes into a white-hot passion neither can deny.

Yet as scorching as their need for each other is, Avery doesn't expect Nick's interest in her to last. Nor does she dare to dream that the desire she feels for this scarred, emotionally remote man could deepen into something real. For Avery has secrets of her own--and a past that could destroy her . . . and shatter everything she and Nick share.

Lara Adrian’s For 100 Days is a fabulous kick off book in the 100 Series.  Avery Ross will grab your heartstrings with her down-and-out luck.  The journey that awaits her will have you rooting for a happily-ever-after ending.  The story is filled with mystery and suspense as Avery’s past comes out in pieces, keeping the reader glued to the pages.

Even though Avery and Nick set the pages on fire, there are issues holding each of them back from committing fully to their relationship.  By the end of the book the reader is granted glimpses into their issues and the next book is set into motion.

For 100 Days has an ongoing plot that moves forward at a steady pace and will be continued into the next book.  The characters are engaging, mysterious, and appeal to the readers emotions.  Don’t miss out on Avery and Nick’s debut adventure. 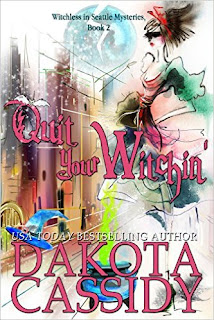 "“Hands off, Sticky Fingers Louise. No touching evidence. You do remember how that went down the last time, don’t you? Think Montblanc pen and accusing someone unjustly.”


There's been another murder in Ebenezer Falls, Washington State, and Stevie, Winterbottom, and Belfry are on the case…sort of! USA Today bestselling cozy mystery author Dakota Cassidy's newest addition to the Witchless In Seattle Mysteries, Quit Your Witchin' is a hilarious thrill ride of food trucks, suspects, and spirits for our intrepid spy-in-training. This whodunnit will keep you guessing from beginning to end!

Tito Bustamante, my beloved purveyor of mouth-watering Mexican munchies, has been found dead in the food truck court! Rumor has it Tito was stickin’ his chimichanga where it didn’t belong, and my gut-not to mention his less-than-natural death-says murder.

No one is above suspicion. Not Tito’s own wife and daughter, not his arch food truck enemy Jacob…certainly not the son Tito didn’t know about, newly arrived in Ebenezer Falls and getting cozy with my hired help.

Do join me (and try not to point and laugh) as I juggle catching a killer with the home renovations from hell, snooping for clues about Win’s previous life, gabbing with and eavesdropping on the locals, and enduring a visit from my very unwelcome, very annoyingly gorgeous ex-coven leader-all while continuing to adjust to my new witchless existence!

This cozy mystery has a complete cast of oddball characters from witches to ghosts and bats to psychics. Witchless In Seattle Mysteries is a spin-off of Dakota Cassidy's bestselling paranormal romance series, A Paris, Texas Romance."

Thoroughly enjoyed the trip back into Ebenezer Falls in the second book Quit Your Witchin’ of the Witchless In Seattle Mysteries.  Stevie Cartwright is settling into the town, becoming a contributing citizen, and dealing without her witch powers.  Winterbottom, Stevie’s ghost spy, is as charming as ever.  He’s become very protective of Ms. Cartwright and with good reason.

Alas, Tito the taco man has been murdered.  That’s the second murder in this small town in less than two months and Stevie is in the middle of all the action again.  She just can’t help it.

Never fear, Belfry, her cotton bat familiar is up for any challenge!  Between Belfry and Winterbottom they have to help Stevie solve the murder mystery and keep her alive in the process.

There is plenty of action in Quit Your Witchin’ to have you glued to the pages.  The characters and setting are full of small town charm and snark.  Dakota Cassidy portrays the small town gossip and cattiness well and will have you laughing and cheering on Stevie Cartwright as she finds her way.

Quit Your Witchin’ contains a visit from a character in another related story.  Secrets are revealed that will have you stewing in anticipation for the next book.  Great story and beautiful cover art are not to be missed.
Posted by Siren Book Reviews at 5:57 PM 0 comments