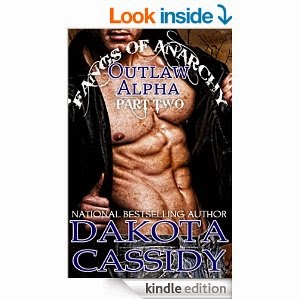 What's worse than being a paranormal whose every liberty has been stripped away by the human government? For Freya Ashe, maybe it's being a smart, independent werewolf forced to blindly follow sexist pack rules.

Or perhaps being chosen to mate with a wolf who makes her want to slip into something more comfortable...like a coma. Or kinda-sorta falling for Liam McConnell, a vampire who's off limits, no matter how much she lusts after his big, buff bod.

Or maybe it's the blackouts, the drugs, the life-altering species change against her will and, oh yeah, the huge mob outside her door with murder on their minds.

Yep, Freya's quiet life is unraveling at warp speed. Good thing she has a sexy vampire scoundrel to hold on to, huh?

Part two of Fangs of Anarchy: Undone brings us right into the thick of the last cliff-hanger drama.  I won’t ruin it for anyone trying to catch up, but I will say we get to see a very pissed off Freya Ashe.  Unfortunate for Liam McConnell because she’s mad at him and with good reason.

Everything up to this point in Freya Ashe’s life has just been turned upside down and inside out.  She has a lot of adjusting to do and will need Liam’s help.  As it turns out, Freya really doesn’t know a lot about Liam.  How do you trust and accept help from someone that you barely know?  These and many other questions will need to be answered in the next episode of Fangs of Anarchy.

Freya Ashe and Liam McConnell are developing more as characters as the story continues and we learn more about each of them.  These story episodes leave the character development to unfold like peeling away layers of an onion.  We get a little more substance with each new episode.

As of now, I love the personalities that are emerging in the two main characters.  Freya is turning out to be a strong, loving, independent woman.  Liam is an alpha male with a quirky sense of humor and an emerging protective streak he didn’t know he had.

With any good book opera there must be drama to keep us coming back for more.  This episode has plenty of drama between the main characters, but also includes an added bonus of a murder mystery.  Alas, this is where Dakota Cassidy leaves her readers hanging, looking over a cliff into the abyss, and waiting for the next episode.
Posted by Siren Book Reviews at 6:12 AM 0 comments In part three, as Spencer and Larkin dig deeper into their investigation of the detective’s best friends murder and the suspicious circumstances surrounding yet another death in her sleepy town, they also investigate each other.

While neither can deny their intense physical attraction, they also can’t deny a very big problem.

Someone’s killing people—someone with fangs, and it’s Larkin’s duty to find out who’s doing the killing.

But how does a guy who’s falling for a sexy vampire do the right thing when it could mean risking her entire clan’s discovery in the process?

Because if the hot detective isn’t careful, he could find the woman he wants more than any other before, staked at dawn...

*Author note: Dear readers, Please note, if you recognize this title, this book, originally published in 2006, is a rerelease and has been updated, revised and expanded. Second,
This is part three of approximately a four-part serial. You know what that means? That’s right—cliffhangers (cue evil music). But wait! Before you hate, I hear anticipation is good for your complexion, and even your hair. I don’t know if that’s true or just a rumor, but is it worth the risk? Nonetheless, I solemnly swear to keep the stories coming swiftly, so your heads don’t asplode from waiting!

This episode picks up after the cliff-hanger in episode two.  We are welcomed back to the story with some very colorful wording.  Spencer has one of the best rants in her head that I’ve seen on paper.  I love how she is remembering household things as she’s cussing Joffrey out in her thoughts.

Spencer is full of spit, vinegar, and fire in this episode making for an exciting read.  We learn more about Larkin and his background.  The reader gets to see Spencer and Larkin’s relationship start to take shape.  They are going at it hot and heavy in this episode.

We are also treated to more mystery regarding Alan’s death and alleged suicide.  Spencer’s brother Ethan comes home and brings with him a juicy plot twist that will have some ramifications.  Then the author leaves us on a Larkin Cliff-hanger.

Part three is a fast moving episode with a lot of information that you will not want to miss out on.

Posted by Siren Book Reviews at 5:44 AM 0 comments