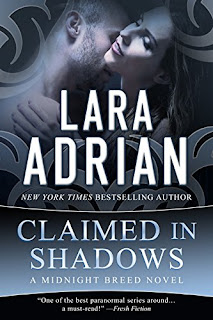 In this pulse-pounding new Midnight Breed vampire romance novel from New York Times and #1 international bestselling author Lara Adrian, passion explodes between a daywalking member of the Order and a fiery female warrior whose shadowy past will test the bonds of both duty and desire.

As the son of a formidable Breed warrior, Aric Chase has been devoted to the Order all his life. With his training completed, all he needs is one successful mission before he can join the fight to destroy the Order’s chief nemesis, Opus Nostrum. His rare ability to daywalk lands Aric an assignment in Montreal, where he learns he’s to be teamed with another new recruit, a beautiful, but tough-as-nails Breedmate named Kaya Laurent.

Independent and driven, Kaya wants nothing more than to become a full-fledged member of the Order. Having grown up in squalor and neglect on the streets of Montreal, she longs for the close-knit family she’s found during her training to be a warrior. Eager to prove herself, she is thrilled to be given the chance at a key operation—even if she must share the mission with an arrogant, far-too-seductive Breed male who’s practically Order royalty.

Their unwanted partnership soon erupts into a desire neither of them can resist. But when Kaya’s past reaches out from the shadows to call her back, she must decide between protecting a dark alliance that could shatter her dreams of joining the team and a truth that could not only forfeit Aric’s faith in her, but bring the enemy right to the Order’s door.

Absolutely loved Claimed in Shadows, the latest novel in the Midnight Breed Series.  This book keeps you on the edge of your seat with non-stop action and plot twists that keep you guessing.

Kaya Laurent is a new Breedmate to the series and Aric Chase is the son of one of the original “Order” founders.  I won’t give anything away in the review, but know that you will find out in the book.  If you have read the previous books then this is not a surprise.

The war between the Order and Opus Nostrum is heating up and we see that clearly in this book.  The Breed are coming together and need to get ahead of the enemy before it’s too late.  Kaya Laurent and Aric Chase make a great addition to the Breed warriors and take center stage.

Kaya wants nothing more that to finally fit in somewhere.  Aric is not looking for anything as he breezes into town to do his job and move on.  The two clash and sparks fly.

The plot and romance are entwined beautifully so that you don’t want to put the book down until you are done.  This is a wonderful addition to the Midnight Breed Series.

I received an ARC for an honest review.
Posted by Siren Book Reviews at 3:09 PM 0 comments