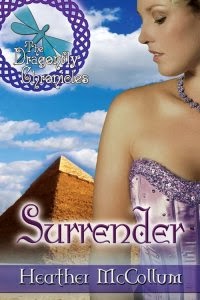 To save her father, Kailin must control her magical gift of telekinesis and unearth the cryptic Orb of Life in nineteenth-century Egypt. Only one man can help her, a treasure hunter with an agenda of his own. Besides battling demons, Kailin must also battle her attraction to the handsome American cowboy aiding her search.

Jackson Black desperately wants the Orb, an artifact said to have power over life and death. But to get it he must ignore his conscience and do things he never thought he'd do. Falling for Kailin will only jeopardize his mission.
Only Kailin's complete surrender to Jackson, the one man who can mute her powers, will save her life. But when she discovers his secret, it will take more than magic to save her heart. It will take trust and the ultimate treasure--love.

Surrender: The Dragonfly Chronicles is the fourth in the series.  I have read only the 3rd and 4th books of this series.  Surrender follows the fourth sister who has the bulk of their mother's magical powers.  She is so powerful that she cannot ever let down her guard for fear of injuring those that she loves.  Because of this, she has constructed mental walls to stay behind and never integrates with the general populace.  She resides in late Victorian England during the boom of the Egyptian tomb raiding period.  Kailin has been adopted and trained by an archeologist who found her in and Egyptian tomb as a child and is aware of her magic.  The story is rather Indiana Jones-ish and I enjoyed the scenery employed.

The interplay between Kailin and Jackson Black is amusing.  Jackson is keeping secrets from her and has the role of American tomb raiding bad boy.  Kailin must trust him for them to become the destined mates of prophecy.  But how can one surrender to someone they cannot truly trust when they have spent their life living behind mental walls of safety?  Can Kailin trust the one man who completely disarms her of her magical powers and yet continues to lie to her?  I know I couldn't!  This is a great read with a completely different feel than the previous novel.  Read it, you'll love it.