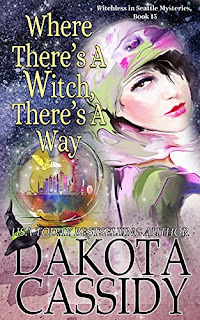 No, silly. Not us. Team #Stewin is still enjoying being engaged and a nice long winter hiatus from murder and ghost chasing.

Until we open up Madam Zoltar's for the beginning of tourist season and the first customers are a bridal party from the seventh level of you-know-where! When the soon-to-be ex-husband of the matron of honor is found dead at the motel where the bridal party is staying and she's accused of his murder--a murder we're convinced she didn't commit--our quiet comes to a screeching halt. Add in the matron of honors dead twin, who appears to be desperately trying to get some kind of message to us, Belfry who's behaving strangely, and more poofy pink dresses than you can count, and you've got yourself a mystery. A mystery we're determined to solve! The gang's all here. Join us for another romp in Witchless in Seattle, won't you?

Great to see Stevie and Win in action together with their sidekicks Arkady and Belfry. Where There’s a Witch, There’s a Way is an interesting murder mystery with lots of action, both normal and paranormal. I think one of the characters was channeling her inner “Nina” (from the Accidental Series) the whole book. The murder mystery is well done and all wrapped up for us by the end of the book.

Dana has become more involved with Win and there are some intriguing side effects of their relationship. As a reader, I hope that they all get to work on a case together in the future.

It was nice to see Stevie and Win’s relationship progressing with more teasing about wedding plans and some dates sprinkled into the story.

This was a fun book and a great addition to the series.

Posted by Siren Book Reviews at 7:53 AM 0 comments