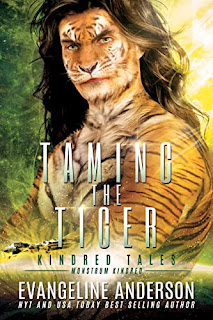 A wounded warrior tormented by madness… Finds the one woman who can bring him back from the brink. Can Christine and Roarn fight the odds to be together? And will she dare to try…Taming the Tiger?

Christine is a single mom with an empty nest. Now approaching menopause, she thinks she has nothing to look forward to but loneliness. That is, until she finds a strange man-beast caught in a trap on her land.

Roarn is a Tiger Monstrum Kindred trapped in a mental state called The Fury. Ever since a traumatic incident in battle five years before, he has been more beast than man, living on his animal instincts without the ability to reason or think. That is, until he smells Christine and her scent clears The Fury from his head. A relationship quickly grows between the mismatched pair—Roarn finds the beautiful Mature Elite irresistible—he needs to scent and taste her to keep The Fury at bay—and Christine is more than willing to help him. But Roarn is a fugitive bound for prison and the other Monstrum are looking for him. Christine knows she can only hide him for so long before he is found. And when her drug-dealer neighbors start stirring up trouble, it seems their time is even shorter than she feared. Can Christine and Roarn fight the odds to be together? Will The Fury return and rob Roarn of his reason? And can Christine bring him back from the brink? Read Taming the Tiger to find out…

Great characters, both courageous and flawed. Christine is an older woman that has experience with loss, children, divorce, and a career with animals. She’s the perfect woman to help Roarn through his Fury. She is selfless, bold, and smart.

Roarn is stuck in a horrible cycle of guilt, anger, sadness, and regret. The mental illness that is the Fury is keeping him from living his life. He’s kind, caring, brave, and has survived a war. Roarn is someone that just needs some extra care.

Their growing relationship is fraught with danger and suspense. There is a criminal element near Christine’s home and Roarn is wanted by his own people. They must be on constant guard. I rather enjoy that Evangeline Anderson always makes sure the bad/evil characters get what they deserve. She doesn’t discriminate when it comes to justice.

Posted by Siren Book Reviews at 11:51 AM 0 comments