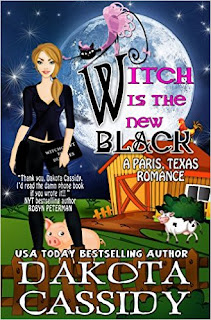 After spending ten months in magic-abuse jail for a crime she doesn’t remember committing, accident-prone witch-in-denial Bernice Sutton is zapped to the small paranormal town of Paris, Texas. With Miss Fee Line, her kitty drag-queen familiar, by her side, Bernie just wants to fulfill the terms of her parole—shoveling horse and cow dung on a ranch—so she can get back to Boston and dig into the mystery of her parents’ deaths and her witch lineage.

But plans be damned, Bernie’s quickly distracted by the town’s quirky cast of magical characters, from Winnie—the sassy owner of the local witch halfway house—to the entire posse of Poise Pad wearers at the senior center. And then there’s the biggest distraction of all, Ridge Donovan, Mr. Hot-Pants ranch owner. Maybe it couldn’t hurt to let them teach her how to harness her magic; if nothing else, it might make her less of a walking disaster. And Ridge is one hunk—er, *helpful* study partner.

Between learning spells, wreaking havoc on the ranch, turning bingo night at the senior center into a “whirlwind” of excitement, and fighting her attraction to Ridge, Bernie is unprepared for an unwelcome person from her past. On one hand, he’s the key to her lifelong questions. On the other, he could destroy the new life she’s coming to enjoy—and the lives of all those she’s coming to love.

Witch Is The New Black is the third book in the Paris Texas Romance series.  I have not had a chance to read the first two so this story took some time to get into, but by the end of the first chapter I was hooked.  However by the end of the book I was still not a fan of one of the names in the story, Baba Yaga, as it reminded me of telletubbies.

Dakota Cassidy spins a tale with surprise plot twists and turns galore.  Once you’re hooked the story takes you on a fun journey through Bernie Sutton’s life as a witch parolee.  Bernie didn’t even know she was a witch until she landed in magic-abuse jail.  The surprises for Bernie keep coming as the riddle of how she became a witch unravels throughout the story.

Bernie is a great heroine.  Independent and caring, trying to make her way in this new and crazy world on her own.  Along the way she finds out she doesn’t have to be alone as the wonderful seniors of Paris, Texas take her under their wings.  The welcoming community of Paris helps get Bernie settled.

There is one resident that seems to do anything but settle Bernie and that would be her boss, Ridge Donovan.  She can’t stop thinking about him which leads to unsuspected witch shenanigans.  Ridge helps Bernie with more than just studying as they get to know one another.  I found the romance to be comfortable.  Their relationship was set on simmer and towards the end the heat was turned up.

While Bernie is lusting for Ridge and Ridge is lusting for Bernie there are evil people in the wings ready to ruin everything for them both.  Will all the witch training, studying, and reading Bernie did help save the day?  Find out in Witch Is The New Black.  You will not be disappointed in this fun read that has more of a happily-ever-after-for-now ending.  We can expect another installment in this series coming out in December 2015.  Hopefully we will see more of all of these characters then.
Posted by Siren Book Reviews at 7:29 PM 0 comments