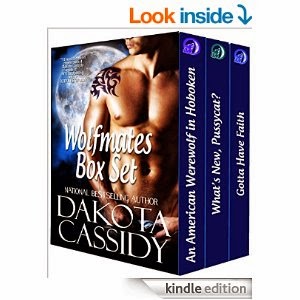 Blurb/Summary:
An American Werewolf in Hoboken--

Wooing a life mate can be hard enough for a wolf, wooing one while under the threat of a curse even more so.

Wooing a mate while pretending to be her dog? Nearly impossible.

After being drugged and captured by Animal Control, Max Adams is on Hoboken's doggie death row when his life mate adopts him, takes him home, and promptly names him Fluffy. While JC, in all her new-pet-owner-ness, feeds "Fluffy" vile kibble, dresses him in mortifying dog couture, and schedules to have his manhood removed, Max's human side gets to know JC. Especially in the biblical sense.

Hopefully well enough to make her fall madly in love, mate with him under the full moon, and move with him to Cedar Glen to live happily ever after forever and ever amen. And fast.

Because the curse comes with a deadline...and the clock is ticking.

Martine Brooks is in a pickle. Derrick Adams is in a jam.

Pickles and jam. Not exactly a hot combo. Unless the "pickle" is a sultry, sassy cat shifter and the "jam" is a gorgeous hunk of wolf.

Derrick is cursed to die if he doesn't make the woot-woot with his life mate on the night of the next full moon. Martine's been held captive by a power-hungry warlock for six long months, forced to do his bidding before finding herself stuffed in a cat carrier and ditched at a 7-Eleven.

After rescuing her from a Dumpster, Derrick and Martine strike a mutually beneficial deal: Mate, save a life, walk away—both alive and kicking. Win! Yet, there are kinks in the plan. Like the fact that Martine's one-time captor is on the hunt, planning to extinguish all of her nine lives at once. Or the fact the curse threatening Derrick's life is about to throw him a monster curve ball.

But the biggest kink might prove to be Derrick and Martine themselves, two avowed commitment-phoebes...who are beginning to wonder what forever looks like.

Five years ago, Brock Adams disappeared from Cedar Glen, New Jersey, never to be seen or heard from again, leaving behind his wife Faith, his daughters…and two sons under a family curse.

Give up everything. That was the deal. Give up his werewolf pack, his family and his immortality, in exchange for finally, finally ridding his sons of the deadly curse. But when a disguised Brock sneaks back into Cedar Glen, he finds the curse still very much in effect. He also bumps into Faith, who he aches for just as much now as the day he left.

Coming back was a horrible idea. Winston, his foul-tempered fairy friend, told him so. But did Brock listen? Noooo. He’s listening to his heart and his libido, and both are begging for one more moment in Faith’s arms. So what if she doesn’t even know it’s really him? And one of his sons hates him? And he’ll have to leave again? And he has a vindictive witch on his trail…?

***Author Note: Dear readers, Please note, if you recognize these titles, these books, originally published in 2006, are a rerelease and have been updated, revised and expanded.

These books are awesome on their own, but it was so much more fun to read them in the box set one right after the other.  The three stories; An American Werewolf in Hoboken, What’s New, Pussycat?, and Gotta Have Faith are all interrelated and surrounding the Adams Family curse.  I promise not to give away too much, but basically the Adams men have to go on a journey to find their life mates.  The journey is always fraught with danger, the possibility of failure, and imminent death.  Never fear though, Dakota Cassidy’s characters laugh in the face of death and are forced to do all kinds of crazy things in the name of love.

The first story is about Max and JC.  Both strong and confident characters that will make you laugh.  In the second story we meet Derrick and Martine.  Both pig-headed and stubborn characters that have to learn to trust.  In the last story we get Faith and Brock’s tale.  Faith and Brock are Max and Derrick’s parents.  They are the epitome of loyalty.

Each story has a great plot with twists and turns.  Some plot twists are more like mini tornados that will leave your jaw on the floor.  Every couple has their hot, hot, hot moments some a little more scorching than others.

As a reader, I really liked how each story built upon the previous one while you learned more about all the characters and the Cedar Glen townsfolk.  There are some very colorful secondary characters that I would love to see get their own story someday.

These three stories did not disappoint.  Each had a thrilling part, sexy part, mystery/suspense part, and ended with a HEA part.  Now how they got to that HEA part I’m not going to expand upon because that is the meat of the stories and the journey you must take with these fun characters.  I highly recommend the Wolf Mates Box Set.