Luna Watkins can’t remember feeling so stressed. Her teenage son Nick’s health issues are reemerging and her ex Ben wants to help but is just making ends meet with odd jobs. Her catering business is thriving but too hectic for her to handle, at least that’s what it feels like. Not to mention since she’s been divorced, she hasn’t dated much and has had sex even less. When Nick decides to visit his grandparents for the summer, Luna is devastated. And yet, she sees a chance to work through her anger and her angst. Maybe some time to feed her body, mind and soul knowing he’s well taken care of.

Enter Adam Singleton, her new, last minute server. Handsome, gruff Adam who’s working through his own anger.  Flirting turns to sparring. Sparring turns to angry sex—like therapy but naked. As time goes by and Luna and Adam become even more entangled, with their hardships and each other, the question becomes, does angry sex turn to more anger…or peace?

In the beginning, I wanted to hate this story.  The title almost turned me away, but then as I began to get to know Luna a bit more and understand how helpless she felt with her son’s disease, I realized where the crux of her anger came from and that she needed an outlet to feel a sense of normalcy return to her 24/7 hectic life.

Soon the feelings turn to more than just fucking and both sides must decide if they feel more.  With a set of nosey family members it’s no secret who they are cheering for.  Maybe if Luna chooses to let go a bit and enjoy the love of a good man, she will see that obsessing over what cannot be changed can free her from the chains she’s wrapped around herself.  Maybe if Adam can openly trust one woman he’ll realize he also doesn’t have to go through his situation alone.  It takes one smart teen to voice the solution.  Hopefully they will cede to how they feel and have a happily ever after.
Posted by Siren Book Reviews at 4:46 PM 0 comments

Gail MacMillan, Holding Off for a Hero 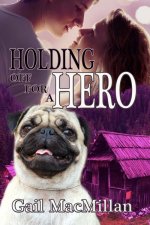 Title:  Holding Off for a Hero

Beautiful, vivacious Emma Prescott has a love-'em-and-leave-'em reputation.  Fact is, Emma's holding off for a hero.  When she moves to a cabin at wilderness Loon Lake and meets her one neighbour, biology professor Frasier MacKenzie, he's still just another guy, even with his killer blue eyes and a body that just won't quit...until he rescues her and her Pug from one danger after another, from drowning to wild animals to a pair of armed and angry drug dealers.  Then he definitely falls into hero territory.

But the professor has no intention of filling the role of white knight in Emma's life.  All he wants is to be rid of her and her annoying little dog so he can get on with his "research."  In fact, he's ordered to get rid of them whether he wants to or not.

Looks as if Emma may have to go on holding off for a hero...

This was a surprisingly enjoyable read!  I found it a bit frustrating at times: Emma’s behaviors were quite often as difficult to take for the reader as they were for Frasier.

The author did a great job of building background and character as well as suspense and mystery.  The humor in Emma’s personality as she related to Frasier had me smiling to myself quite often. I thought it sometimes took a bit too long to get to some of the important plot points but, other than that, I recommend this as a good read.
Posted by Siren Book Reviews at 6:27 PM 1 comments 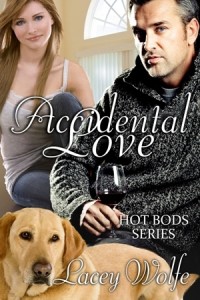 Has Jane accidentally fallen for the decoy? Sometimes there is only one thing to do when you get dumped—make the ex jealous with someone new. Which is exactly what Jane plans to do with Ben, an older, handsome man who has agreed to act as her new love interest.

When Ben meets Toby, Jane's unruly dog, he offers to help her train him. But as Ben helps Jane gain control of her dog, he realizes he's lost control of his feelings, and he's beginning to fall for the much younger woman.

Suddenly, Jane can't seem to remember what she ever saw in her ex. All she can focus on is the way Ben makes her feel each time he kisses her. But now the ex has decided he wants her back, and he's willing to play dirty to make it happen.

This was a fun, happy, quick read!  Ms. Wolfe did a fine job detailing the life Jane lives prior to meeting Ben as well as his effect on her life. Her ex is “the guy we all love to hate” and his characterization is spot-on.

The character of Francesca, Jane’s new best friend, becomes more interesting as the story progresses; I would like to see her get her own story.

The plot progresses at a nice, even pace without any serious deviations to detract from the story of Ben and Jane.  I would recommend this to anyone looking for a fast bit of older man/younger woman romance.
Posted by Siren Book Reviews at 6:22 PM 0 comments 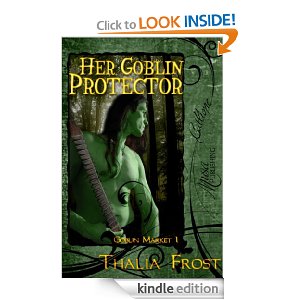 Lizzie Lake’s house sitting job in the hills of Appalachia is about to get very interesting when a sensual fight between man and goblin breaks out...

Lizzie Lake looks forward to a few peaceful months at her aunt’s place, Landry’s Farm, but her first night proves the place is anything but tranquil.

When she sees a non-human but handsome face in the window, she wonders if the superstitions her Aunt Lou holds are true. After finding a dog eared copy of the poem Goblin Market, she suspects that an old myth from the past lives on in the present. Handsome local Riley Mann distracts her from the strange goings on, but an encounter with a goblin man, Lorcan, changes everything. Will he be able to protect Lizzie from danger, and can she trust her heart to him?

Her Goblin Protector was an enjoyable quick read.  The story seemed to be more of an introduction to characters than an actual complete book, but was entertaining and captivating nonetheless.

Lizzie, a college graduate housesitting for her aunt finds herself spooked by peering eyes her first evening in the secluded home. Thereafter, she finds clues as to who or what was watching her through a classic novel she finds on her aunt's bookshelf.

Lorcan, a goblin, spotted Lizzie upon her arrival and knew in an instant she belonged to him.  He watched her through the window and even haunts her sleep before finally revealing himself during the climax of the tale.

It was a smooth read, descriptive and imaginitive.  There are more books in the Goblin series by this author which might have been better released as a compilation piece.
Posted by Siren Book Reviews at 6:13 PM 0 comments