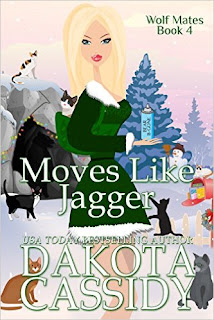 Author:  Dakota Cassidy
Rating: Four And A Half Siren Stones

Moves Like Jagger, the eagerly anticipated 4th book in the Wolf Mates series by USA Today bestselling author Dakota Cassidy is here. Return to Cedar Glen for a laugh-out-loud cast of characters and a mystery to solve. Love is in the air and danger is on the horizon in this holiday romp in the woods.

The weather outside is frightful, but the romance is so delightful in Cedar Glen!

Vivienne Hathaway is a cat shifter who's still learning about the ways of the paranormal. Sometimes she finds herself in a bit of a mess as she works out the kinks.

Like looking out from the inside of a dog crate.

And on her way to be spayed.

When she meets hot bear-shifter, Jagger Dubrov and Cedar Glen's local mobile veterinarian during a catch and release program designed to thwart the population of feral cats in his new hometown, Jagger mistakenly catches Viv, and it's all out holiday magic at first sight.

As Viv and Jagger begin a perfectly fine Christmas romance and get to know each other over eggnog and mistletoe, a problem lurks. Someone’s hunting pets and killing the wildlife in Cedar Glen, a strictly forbidden practice. And that someone? They also want Viv dead.

You won’t want to miss this little gem of a story.  Dakota Cassidy brings us back to Cedar Glen for Vivienne Hathaway and Jagger Dubrov’s story.  In case you are new to the series, Cedar Glen is a small town of shape-shifters most of them werewolves.  However, diversity is hitting the little town.

Vivienne Hathaway is a cat-shifter that is best friends with the alpha’s wife JC.  Vivienne is down on her luck and is accepting the help of both JC and Max the werewolf alpha.  She finally feels free enough to shift and run through the town and surrounding woods, that is until she gets caught by Jagger Dubrov.

Jagger Dubrov is Cedar Glen’s newest arrival and is setting up shop as the mobile veterinarian for the area.  He accidentally traps and catches Vivienne during her cat shift.  Hilarity ensues from that point on. Vivienne and Jagger’s comments, quips, and inside jokes had me laughing out loud.  Their chemistry together is palpable.

As they get to know one another and share their love of animals there is someone in the shadows ready to rip them apart.  There is just enough mystery and suspense in this romance to keep you turning the pages as fast as you can.

Moves Like Jagger is a great holiday read for all of you that like to read seasonally.  Dakota Cassidy artfully combined Christmas, mystery, romantic comedy, paranormal romance, and a HEA ending into a fun story to read.  I fell in love with this couple and you will too.