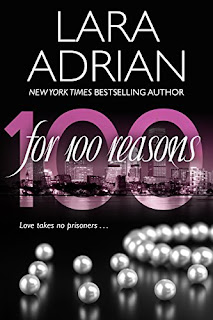 For 100 Days she deceived him. For 100 Nights, he demanded her complete surrender. Now, after all of the secrets and lies and heartbreak, they'll have to decide if their love is strong enough to try again...For 100 Reasons.

Billionaire Dominic Baine stepped into Avery Ross's life when it was at its lowest. Obsessed with the beautiful, struggling artist, Nick was determined to have her. What began as a scorching seduction soon burned out of control, exploding into a white-hot passion neither of them could deny.

Yet Nick and Avery are two damaged people, both haunted by dark secrets with the power to destroy them. And for Nick, the ugly past that shaped him cannot compare to the unforgivable deception that drives Avery from his arms, from his life. Now the man accustomed to having everything he desires must find a way to redeem himself to the only woman he has ever loved.

Avery Ross has known heartbreak. She has known betrayal and loss, but nothing like the pain that loving Dominic Baine has brought into her life. Reeling from the aftermath of his devastating revelation, instead of allowing despair to break her, she builds herself into something stronger--the fearless woman and gifted artist that Nick's passion has taught her to be. Yet her heart is in pieces, and despite everything she has, the one thing she needs is the man whose possessive desires and consuming love holds the power to either save them both or shatter her forever. . . .

You don’t need 100 reasons to read the finale in this series.  The plot thickens, but keeps up the tempo from the other two books.  More secrets are revealed leaving both Dominic and Avery raw.  For 100 Reasons comes full circle for these characters giving readers a good overview of how they will handle their future problems.  There were some surprising developments that kept me reading for the answers.

Both Dominic and Avery felt more developed in this book, maybe because they started telling the truth and not just what they wanted to reveal to one another.  Real life issues came to light during their journey and took precedence making them seem more authentic.

For 100 Reasons was a very satisfying conclusion to the series.  I would recommend starting at the beginning to experience their whole journey together.  You’ll have to read the book to see how Dominic and Avery end up.  Based on how they handled their issues together readers can imagine a happily-ever-after future. 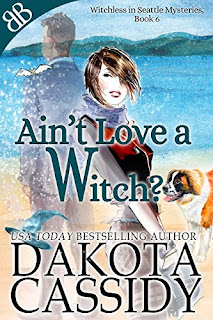 The name’s Winterbottom. Crispin Alistair Winterbottom. But you can call me Win, ex-international man of mystery, current resident of Plane Limbo, and ghost attached to Stephania Cartwright.

For reasons unknown to us, Stevie can hear me, perhaps because she’s also an ex. An ex-witch, in her case, having lost her powers shortly before our first fateful meeting, upon her return to her hometown of Ebenezer Falls, Washington. Now, with my guidance—and help from her familiar, Belfry, and the spectral form of my old Russian adversary, Arkady—Stevie spends her days as the town medium, with a little light mystery-solving on the side.

The latter of which I’d much prefer she’d avoid, considering the constant danger in which Stevie finds herself. You see, the longer we’re together, the deeper and more complex my feelings become for my mini-spy. And the closer she comes to discovering the few secrets I’m still trying to keep…for both our sakes. But when a precious life is on the line, even I know there’s no stopping my dove from going all in to solve the latest mystery that lands on our doorstep—literally.

Along with Arkady and Bel, I’ll assist her in this latest endeavor. Because there’s more than one precious life on the line…including the one I can’t live without.

Absolutely loved that this was written in Winterbottom’s perspective.  The same lovable characters are in this story and now we get to see them through super spy guy’s eyes.

This time it is Winterbottom’s past that brings trouble to Stevie’s door.  Nothing that two spectral spies, a bat, a dog, and a turkey can’t handle.  Book six in the series brings out a lot of emotional baggage in our main characters.  We get to see Winterbottom’s protective streak take on a whole new level.  Stevie’s maternal instincts are shoved into high gear.  Arkady is stuck in the middle of the turmoil.   Secrets are spilled and it gets messy.

Ain’t Love a Witch? is a fast paced fun read that will leave you feeling satisfied and hopeful in the end.