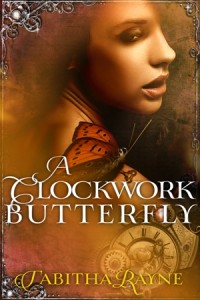 Mankind is close to extinction. Toxins have all but wiped out the male population. The remaining fertile men are housed in manors where their seed is collected. Lena Lee is a new collector with a rare pheromone believed to reignite human fertility. She's assigned a male who's predicted to be her perfect match. Angelo, a clockwork butterfly maker, is held captive, his essence harvested daily by Lena. Over time, the couple begins to fall in love, something which is strictly prohibited. When their forbidden love is discovered, Lena is banished from the manor. Torn apart by the duty that brought them together, Lena and Angelo must find a way back to each other. But even if Angelo manages to escape, he doesn't know where to find Lena. Will following the path of the clockwork butterfly lead him to his true love?

Lena begins as a naive girl, ignorant to the ways of the world around her.  Socially and sexually awkward, she enters her role as a collector with bitterness towards the enormous responsibility before her.  Mae is cunning and sensual, the perfect balance to Lena’s naiveté.  Taking Lena under her wing to teach her quickly becomes more than her job, as their relationship blossoms.  Lena is just another assignment, right?  Mae has others with whom she’s assigned to “teach” and Lena is a collector now and her duty is to Angelo.  Feelings are forbidden, but can they be restrained?

Angelo, one of the last men on the planet, a prisoner in a lush cell. Angelo is Lena’s perfect match, chemically.  Together their essences are the key to the repopulation of the male species.  Their encounters are brief and purposeful, but the attraction between them is undeniable and soon they discover they are perfect for each other more than chemically.  They put everything on the line, including the repopulation of the earth, to be together but when Lena is sent away will all hope for happiness be lost to all three of them?