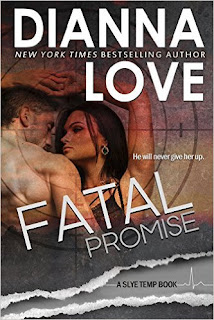 New York Times Bestseller Dianna Love wraps up the exciting Slye Temp romantic thriller series with FATAL PROMISE, Gage and Sabrina’s story that readers have been asking for since the beginning.

When a rogue CIA assassin threatens her Slye Agency family, Sabrina goes after him before he can harm another person on her team. She’s armed, dangerous and in no mood to take prisoners, but the lead she follows exposes the tip of a deadly international threat and adds a new name to the rogue agent’s hit list… Gage, Sabrina’s former CIA handler--and lover.

Gage has waged war on Sabrina’s emotional walls over the past year after she returned from being betrayed during a bloody mission that left her suspicious of everyone in the agency, starting with him. There’s a contract on her head, but keeping Sabrina safe until he can terminate the threat is easier said than done. As one of the deadliest operatives he’s ever met, Sabrina bends to no one’s will. No woman has ever gotten to him the way she has and he wants her back in his arms, but that isn’t going to happen unless they survive this mission. With only one hope of stopping a megalomaniac from starting a third world war, survival depends upon Gage convincing Sabrina to trust him in every way, including her heart.

*This is the final book in the Slye Temp series, but there will be a new romantic suspense series - HAMR Brotherhood - which will include Slye Temp characters who still have more story to tell.

Fatal Promise is a fantastic conclusion to the Slye Temp Series by Dianna Love.  If you have been following this series then you will have an understanding of the story line that has prevailed throughout all the books.  Fatal Promise nicely wraps up the Orion Legacy plot line leaving the reader very satisfied.

We get to see all our favorite characters from previous books make an appearance to help out Sabrina and Gage put down a threat to all of their safety.  There is non-stop action from the very beginning until the end which kept me glued to the pages.  The plot is fast moving and fraught with danger.  There are some heart-stopping and heart-pounding situations that Sabrina and Gage find themselves in.

All that adrenaline leads to some steamy scenes between Gage and Sabrina.  They have to work off that excess energy somehow!  Between the gun fights, kidnapping, and burglary the reader is left hanging as to how these two could possible compose a relationship that could last.

Gage and Sabrina are two peas in a pod with their stubborn attitude and protective streaks a mile long.  When they partner to thwart their common enemy the two have to do some soul searching and face the emotions they have both kept locked up out of fear.  All the drama makes for a wonderful romantic suspense.

I highly recommend Fatal Promise and the Slye Temp Series, you will not be disappointed.