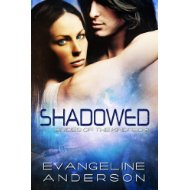 I would recommend this book and look forward to future installments in the Kindred series.
Posted by Siren Book Reviews at 7:22 PM 0 comments