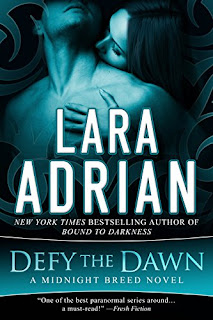 Daywalker Brynne Kirkland survived a hellish upbringing as a product of a madman's lab. Tough, driven, and devoted to her work in law enforcement, Brynne has never dared to risk opening her heart to anyone--least of all a handsome immortal from a world on the verge of war against hers.

Atlantean warrior Zael left the intrigue of his realm several lifetimes ago, along with the battles he fought as one of the queen's legion. As a free-spirited loner walking the fringe of two worlds--that of his secretive and powerful people, and the outside world belonging to mankind and the Breed--it was never his intention to return to combat and bloodshed. Nor had he imagined that he might ever be tempted into anything stronger than desire . . . until he meets Brynne.

Thrust together as allies of the Order in the fight against a diabolical enemy, Zael and Brynne embark on a mission that will ultimately force them to decide between duty to their people, and a passion that defies all bounds.

Defy the Dawn is the story of Brynne Kirkland and Ekizael the Atlantean warrior and how they come together as a couple.  I did really enjoy the story, but I felt that there was a lot of pertinent information missing.  For example, Ekizael’s (Zael) last name.  I looked back through the book and I can’t find it anywhere. Perhaps the Atlanteans to do not have last names.  An explanation would have been helpful.  Brynne is a Daywalker but, the story does not go into detail as to how or why she became a Daywalker.  It briefly goes into her background and we can only assume that is what made her a Daywalker.  I can’t remember if these things were discussed in previous books or not.  I would have thought it important to put in the book about these characters.

There are other things that were left out of this story that would have been helpful background information for people picking up the series for the first time.  Considering this is the fourteenth book in the series you can well imagine that there is a wealth of background information that could not all be included.  I would suggest reading the series in order so as not to feel lost.  There are so many characters, matings, and children that it can seem overwhelming for the newcomer.  This is not a standalone story.

This book is certainly a building block in the series and not to be missed if you are a Midnight Breed Series fan.  The mating of these two characters is a significant plot point regarding the war.  We will more than likely see more of Brynne and Zael in future installments.  Considering that the Atlanteans now know Brynne’s secrets but, her family is still in the dark, I would hope that there is more still to come in their story.