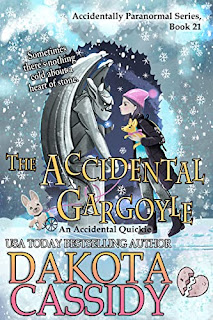 As a one-time OOPs employee, Ingrid Lawson has seen plenty of paranormal accidents. But witnessing and experiencing are two different things, and she’s perfectly fine being a plain ol’ human. So when her ex-boss Nina schleps her around to estate sales, where she purchases two of the butt-ugliest gargoyles in existence to decorate her hedge maze…what happens next is stone-cold cuckoo.

Suddenly, Ingrid’s beloved career as an animal therapist is on hold as Nina, Wanda, Marty and the OOPs gang help her navigate a rocky new life as a nocturnal paranormal with big horns, bigger ears, and an aversion to sunlight. Oh, and there’s the inconvenient matter of attraction to the man who turned her…who’s so familiar… And did we mention the screeching harpies hellbent on getting their hands on her? It’s all hands on deck to keep Ingrid alive until the danger passes, but throw in an old enemy they never saw coming, and her case just may be the hardest yet! ***Author Note: This is an Accidental Quickie and shorter in length than prior novels in the series.***

The Accidental Gargoyle is book 21 in the Accidentally Paranormal Series. It’s cute, quirky, and packed full of non-stop action. This is a short novella and without giving away the whole plot, I’ll say that Ingrid and Griff are polar opposites that come together to make a great couple. The dire circumstances with which they both must face, the supportive OOPs family, and all their rescue pets make for a very enjoyable and exciting journey. As with each book in the Accidental Series the family of characters has grown and the community rallies together. This is an adventure not to be missed in this series.

If this is your first time picking up a book in the Accidentally Paranormal Series then know that there will be a lot of characters that play a part in this story, but each have had their own stories. The main characters Ingrid and Griff are forging a relationship in this tale, so it’s okay to jump into the series as long as you don’t mind missing background on the other characters. Dakota Cassidy does a great job of giving new readers just enough information to keep the story moving and entice readers to try previous books.

The cover art done by Katie Wood is gorgeous! 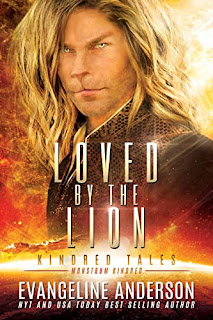 A Monstrum Warrior who has vowed never to Claim a bride…

An older woman, who thinks she’s done with Love…

Can they come together to save the Earth…and each other? What’s the worst Christmas present imaginable? A cheating husband? An angry mob outside your front door? What about Menopause? Minister Emilia Oxley has gotten all three this Yuletide season and she could do without them all, thank you very much. Enter Chief Commander Rarev, the leader of the Monstrum Kindred. He’s had his eye on Emilia from the start. Her courage and determination are incredibly attractive to him, as are her lovely full curves. Also, he can tell by her scent that she’s entering her Second Mating Period—the time of life when a female is most attractive to a Feline Monstrum. Since Rarev is a Lionus Monstrum, he can’t help but notice that Emilia is ripe for the plucking. After he rescues her from an angry mob, the two of them find themselves on a mission to Rigellen Five. There they must compete against three other couples in a series of Trials to earn the right to mine Yillium. The rare mineral is what the Monstrum need in order to defend the Earth from the Darklings, ravenous creatures from another universe which are threatening to overrun the planet. Only if Em and Rarev win the Rigellen Trials can they gain the rights to the Yillium. But since the Rigellen people believe in public displays affection, the Trials are an intimate affair—extremely intimate. Can Em and Rarev come together to save the Earth…and might they find love in the process? Read Loved by the Lion to find out! *Author's note--there is a scene in here that might bother anyone who has ever been attacked before, but I promise it comes out all right in the end. Please read responsibly!

This is the best time to jump into this series if you haven’t been following Evangeline Anderson already. Although this is book 40 in the series the author has introduced a new type of Kindred called Monstrum and this is still very early on in the development.

I really enjoyed the journey between Minister Emilia Oxley and Chief Commander Rarev. They are both brave, self-sacrificing, and loyal servants to their people. Their willingness to sacrifice themselves and make the best decisions for their constituents is what brings them together.

Loved by the Lion has a lot of smoldering suspense that leads to burning desire between Emilia and Rarev. The Kindred type may be different, but the Monstrum have all the protective instincts of the original Kindred. This protective streak added to a very interesting story with creative and imaginative characters.