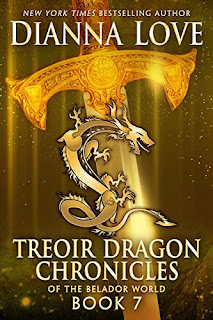 Casidhe followed her conscience. It cost her everything and she now faces Herrick’s wrath for deceiving him. After a disastrous trip to the Caucasus Mountains, Daegan has no mercy for another enemy, then discovers important information about his past from an unlikely source. He’s running out of days to locate the second grimoire volume on his own and enters a hostile Tribunal where Loki demands the return of Sen in one day or Beladors will pay. Reese has to choose between saving millions, including Quinn, from a demon invasion and giving up her baby. Adrianna sees an opening to save herself and Sen, but nothing is ever as it appears when dealing with monsters. Locked away by the Imortik master, Renata discovers friends imprisoned with her, who need her to escape, but she doesn’t trust the dangerous plan. Daegan is forced to make an agonizing decision to find the next grimoire volume, setting changes into motion which can’t be reversed.

Atlanta is pulling apart at the seams and Imortiks are breaking through rifts in other countries. Nonhumans in the alliance are fighting on all fronts to protect humans and their own as more predatory supernaturals pour into the city, including a goddess bent on revenge.

*This is book 7 of a 9-book spinoff series for first time readers as well as current Belador™ fans. All 9 audiobooks will be released within a year.

Treoir Dragon Chronicles of the Belador World: Book 7 had a wonderful pace and great momentum from beginning to end. Readers are treated to more history from a long gone by era that sheds light on Daegan’s past as well as other characters.

Followers of the series will know from book six that there is an awful lot in motion right now. Book seven pushes those issues to the forefront and forces characters to make decisions and take action. Things are all coming to a head as there are only two more books left.

This was a fun read with details you won’t want to miss. There is a doozy of a cliff-hanger at the end like the other books. Each book is like a season finale as you wait for the next season to start. Fortunately for us Dianna Love has been kind and the wait will only be a few months.