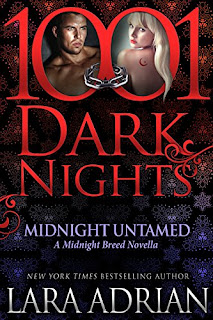 The mission was supposed to be simple. Infiltrate an enemy’s stronghold outside Rome and eliminate its leader. For a Breed warrior as lethal as Ettore Selvaggio, AKA “Savage”, stealth assassinations are only one of his many cold-hearted specialties. But the last thing Savage expects to find behind enemy lines—in his target’s bed—is a woman he once adored.

It’s been years since Savage last saw beautiful Arabella Genova. Years he’s strived to banish to his past, along with the fierce desire he once felt toward Bella . . . and the irresistible calling of her blood that stirs in him even now, despite the fact that she belongs to another male.

But when fate throws Savage and Bella together again in a race for their lives, will his long-lost love prove to be the one woman he can’t live without, or the perfect weapon to destroy him?

Midnight Untamed is a fabulous novella of the Midnight Breed series.  This book is a wonderful addition to the series.  It is an easy read as a standalone book and gives you a glimpse of the war going on in the main series, but doesn’t bog you down with too many details.

In this book we meet Arabella Genova and Ettore Selvaggio.  Readers will enjoy the background story around these two characters and the quick progression of their present and future romance.  I fell in love with these characters and hope that they will be entwined in the main series.

There are secondary characters that help Arabella and Ettore along in their journey.  At the end the author left it open for these characters to have their own story.  I hope that happens soon!

Midnight Untamed starts out with a bang and keeps on going.  The plot moves at an easy pace with some heart stopping moments along the way.  This is a great story to jump into if you wanted to sample Lara Adrian’s writing and get a feel for the Midnight Breed series.
Posted by Siren Book Reviews at 8:41 AM 0 comments