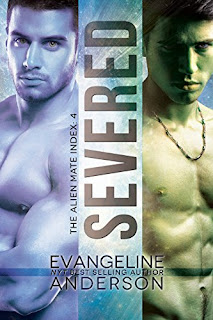 Rylee Hale is having a hard time. As a new business owner just starting out on her own, she’s struggling to attract new clients to her paralegal business.
Then she attracts two that are way more than she can handle.

Drace and Lucian are Denarins—a race of the Twelve Peoples where two males bond together in order to join with a single female. An Alpha and a Beta make the perfect pair to attract and care for a woman in every detail of her life.

But what happens when two Alphas get wrongfully bonded? That’s the dilemma Lucian and Drace are in and only a Pure One from Earth can help them. When they see Rylee helping a couple with their divorce in the AMI viewscreen, they decide she’s exactly the female they need to break the bond between them.

Nobody asked Rylee what she thought about being abducted from her life on Earth and caught in the middle of a conflict between two huge, muscular alien males. It's okay thought--she’s a smart girl—she can handle herself. But once she gets a taste of being bonded to two sexy men who want to please her in every way, will she be able to stand by and watch them be…Severed?

This is one smoking hot alien romance book!  Severed is book four in the Alien Mate Index series.  Readers were treated to a glimpse of Lucian and Drace in Book 3 letting us know their story was coming.  It was worth the wait.

Drace and Lucian are two alpha males that accidentally get psychically bonded.  Males on their planet do bond naturally, but only an alpha and a beta.  Two alphas bonding is unheard of and “wrong” on their planet.  The only solution Drace and Lucian can fathom is breaking the bond and going their separate ways.  They have to travel to Earth to find just the right person to break their bond.

Rylee has had a long day and even longer night by the time Drace and Lucian enter the picture.  They abduct Rylee to save her, but to her it’s all a dream until she wakes up on their spaceship.  After some negotiation, Rylee agrees to help Drace and Lucian do what ever it takes to break their bond.

Their journey is fraught with danger, eminent death, and prejudices that threaten to tear them all to pieces.  Along the way somehow they learn to work as a team.  Rylee falls deeply in love with both men and Drace and Lucian treat her as a special treasure.  The problem that remains throughout the whole story is the bond between the two men.  Will they be able to sever the bond?  Will they be able to walk away from each other and Rylee?

Severed is filled with action, adventure, a few plot twists, and plenty of romance.  As a reader, Rylee, Drace, and Lucian are characters that will stay with you for a while.  They are easy to connect to and even easier to like.  Rylee, Drace, and Lucian’s romance is scorching hot and this book will have you on edge as their story unfolds.  Along the way we are introduced to several new characters and some older characters pop in from previous books.  I thought the story ended a little abruptly so I hope that we will see more of all of these characters in future books.

I highly recommend not missing Severed: Alien Mate Index Book 4 whether you are following the series or not this is an entertaining story. 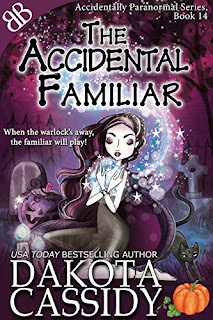 Desperate to pay the rent, Broadway-star wannabe Poppy McGuillicuddy is the middle of DJ-ing a Halloween party when a mishap with a cat named Calamity changes her life forever. Suddenly, she’s a familiar—as in, a witch’s familiar. Or in her case, a warlock’s. Even more specifically, a gorgeous warlock…who wants nothing to do with her. Thank God for the ladies from OOPs, who’ve promised their help as Poppy navigates her accidental paranormal powers.

Despite his last familiar leaving him bitter and disillusioned, warlock Rick Delassantos still isn’t heartless. He’s agreed to give Poppy a few days before contacting Familiar Central and demanding she be reassigned elsewhere. But barely a day is all it takes for Poppy to become the target of some seriously bad magic, forcing Rick to keep her close to ensure her safety. Not exactly a hardship, when his new familiar is as sexy as she is sassy.

With help from the Marty, Nina and Wanda, and assorted other OOPs friends, Rick and Poppy learn some important lessons—fate works in mysterious ways; things aren’t always as they seem; and sometimes the worst evil can be found close to home!

A must read for all the Accidental Series fans!  Dakota Cassidy has a way of making the characters come to life in her books so that the reader feels with them, laughing and crying out loud.  There was much more laughter than crying in this book.

Two new characters are added to the Accidental family, Poppy McGuillicuddy and Rick Delassantos.  Poppy is accidentally turned into a familiar and assigned to be Rick’s warlock familiar.  Rick is not over-joyed with the idea of having a familiar again and it takes a little bargaining on Poppy’s part to convince Rick to give her a chance.  In no time at all Poppy is smack dab in the middle of a magical crisis.

It takes all the OOPs girls, their entourage, and Rick to keep Poppy alive.  Poppy is one head-strong lady.  Nothing is going to stop her from succeeding and planning a future.  She’s hoping that there will be a certain warlock in her future, but she has to survive the magical crisis to find out.  Readers will fall in love with Rick and Poppy!

The Accidental Familiar is filled with lots of magic and mayhem.  Plenty of plot twists and turns to keep you glued to the pages.  There is also a pleasant surprise at the end.  Read the story to find out what is in store next for the OOPs girls!