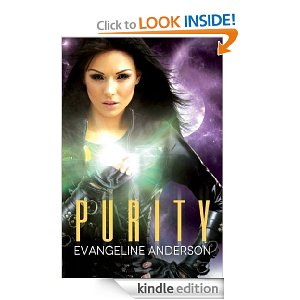 K is a fourth level Paladin and a servant of Purity—the holy nothingness she has been taught to revere and aspire to from childhood. Born on a sexless world from an artificial womb, K was fitted with a black mesh skinsuit at the tender age of nine. The suit nourishes and defends her from enemies and serves as her main weapon in the holy war her people have declared on the rest of the universe. It also eradicates even the slightest traces of emotion. Leading her purge squad in a never-ending mission to rid the universe of the Impure, K is accustomed to killing or enslaving everyone she meets.

That is, until she meets Boone.

Boone is a doctor and geneticist from Colossus—a heavy G world which has rendered the people who inhabited it larger and stronger than regular humans. He’s more than happy to stay on his own planet and do research—until his little sister is taken by Purists and delivered to the pshalite mines. Frantic to rescue her, he hatches a desperate plot—capture a Paladin and use the enemy pawn to gain access to where his sister is being held. K falls into his net—but not without a fight. When she is wounded in the battle, Boone is forced to cut off her skinsuit in order to save her life.

Now, removed from her comforting routine and separated from the parasitic suit, K is beginning to change. Her body is blossoming and her mind is opening. For the first time in her life she can feel…whether she wants to or not. In order to survive in her new environment she has to cooperate with Boone.

However, she soon finds that it isn’t just her body he holds prisoner…
but also her heart.

Boone is a great character; he is kind, caring, and compassionate.  He takes to heart the responsibility of taking care his loved ones and those under his protection, even if they don’t want him to.

K is a fanatic that has been brainwashed to think everyone not like her race should be enslaved or purged.  Without the necessary and continuous reinforcement of her beliefs, she starts to feel and think on her own.  It’s as if a child was put into a woman’s body.  The journey of discovery is an interesting one!

Boone was only going to use K, but as time passes the situation changes.  As he feels responsible for the path they are on, he deems himself responsible for K too.  K fights him every step of the way, even as they fall into a comfortable routine.  Boone finds he is very willing to help K come out of her shell and explore the world around her.

Discovery and exploration lead to passion and love, but Boone is sure that it is all one sided.  Twists and turns in the plot will leave the reader wondering if there will ever be a happy ending.  Purity sucks you in at the beginning and keeps the reader engaged throughout.

The dynamic between the characters was well thought out.  The secondary characters add levity and comic relief.  At the end of Purity there is a brief excerpt for the next story which will flow flawlessly from the first.