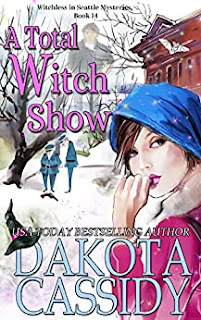 Hello, it’s me, intrepid amateur sleuth, Stevie Cartwright back in the saddle again!

Yep. This time I’m the case that needs solving. My most recent past has come back to haunt me. What I mean by that is, almost every single criminal dead or alive that we’ve captured or we've had a hand in doling out their fate, have been stalking me via the ghost of my very first case.

Remember him? Win’s vengeful cousin, angry and bitter when he lost all of Win’s inheritance to me and tried to kill me, has somehow figured out how to read people on this plane and get them to do his bidding.

So far, I’ve been the recipient of a black eye, I’ve been shot at, and someone tried to blow me up! So how do I, mostly a mere mortal, fight off someone from the afterlife still holding a big, fat grudge?

I call my sister Halliday Valentine to help me fight off the forces of evil, of course! A full-time witch who has visions, and part time sleuth just like me. But the afterlife sure has drastically changed since I lost my powers, and everyone around me becomes suspect as Sal whispers suggestively in the ears of criminals who would like nothing better than to see me kaput.

So when things get so bad, my sister Hal has a vision of me, a mere dead husk of a body, my soul evaporated for eternity, we know we have to take action and call Sal out with the mother of all spells. But with the afterlife in such an uproar, and the delicate timing of the spell, will we get this monkey off my back, or leave the world turned upside down?

Complete action-packed page-turner that delivers an awesome story thirteen books in the making. I loved that Stevie’s sister Halliday and her familiar Atticus were along for the ride.

A Total Witch Show brings tons of past cases to the forefront while trying to solve the current mystery. Though things look bleak, Stevie is surrounded by love and hopeful, helpful friends.

This story is a not to be missed book in the Witchless in Seattle Mysteries series, but they do need to be read in order. You’ll want to meet all the characters that pop up in this book ahead of time! 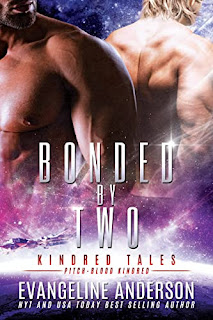 One reluctant Mistress who inherits a fortune

Two Pitch-Blood Kindred warriors on the brink of death When Lexi rescues Bound and Gaze will she allow herself to be…Bonded by Two? Lexi doesn’t know if she can handle a huge Kindred warrior who needs blood to survive…let alone TWO of them! But that’s what she gets when she finds Earth Bound and Star Gazer for sale at the Down Market bodyslave bazaar. Gaze and Bound are Pitch-Blood Kindred and they’re about to die from lack of blood. Unable to ignore their suffering, Lexi buys them and gives them a drink…but now what does she do with them? Gaze and Bound have been looking for the perfect female all their lives. When Lexi shows up and rescues them, they fall in love with the curvy Elite with the creamy brown skin at once. Unfortunately, their new Mistress comes from Zetta Prime—a planet where males and females don’t mix. The idea of bonding with the two of them is completely alien to her. But the pull of instant attraction is strong between the three of them. Did they form a partial bond when Lexi gave the two big warriors her blood at the same time? And will she realize that she loves them before it’s too late? Because whether Lexi wants to admit it or not, she needs protection right now. A cruel Mistress and her evil vat-grown creation are stalking her and only Bound and Gaze can protect her. Will she allow herself to be…Bonded by Two?

Bonded by Two was a fun immersion back into the Kindred world. For those new to this series the Kindred are an alien race that worship a Goddess and revere women.

It was quite the journey for the three main characters to be able to overcome their up-bringing and mind sets. I really enjoyed that Lexi was an independent entrepreneur and forged her own way. Bound and Gaze are Kindred Warriors, but they seemed more relatable as they both run a shipping company. All three were down-to-planet characters that made them more endearing.

This story is full of creativity and some tongue-in-cheek humor. I loved that the heroine, Lexi, worked so hard to help others and in doing so made herself irresistible to those around her, especially Bound and Gaze.

It should be no surprise that a Kindred novel would end with a HEA, but the real enjoyment was reading about the adventures that the three characters endured together.

Bonded by Two is a great addition to the Kindred series. Hopefully Lexi, Bound, and Gaze will pop in from time to time in other stories.

Posted by Siren Book Reviews at 9:17 AM 0 comments