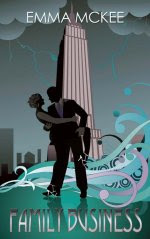 Cat-sitting her great-aunt’s finicky feline offers Nora Bainbridge a rare opportunity to delve into the secrets of the reclusive actress’s younger years. And when a sexy television producer shows up, proposing an episode of Hollywood’s Hottest History based on Aunt Elnora’s off-screen involvement with the mob in Tinseltown, the past starts looking a lot more interesting.

Raised on a steady diet of 1940s films by his mob boss grandfather, the only upside FBI agent Luke McKinnon can see in his current undercover assignment is he’ll get to meet one of the film stars he reveres. The downside is he’s looking for something he doesn’t want to find—evidence that Elnora Bainbridge is involved in trafficking stolen art. A totally unexpected perk is discovering Elnora has a look-alike namesake whose curiosity about her aunt’s wild life drags them into a lot of Family Business.

All she was supposed to do was stay at her aunts, keep an eye on the house, and her pit. That's it. But the moment she stepped foot into the house, Nora's life suddenly got more...interesting.

In Family Business, get ready for a sexy, fun adventure. The book is filled with mystery and intrigue, plus fireworks between an undercover hero and a heroine who looks so much like her aunt it is her namesake. Could Nora's great-aunt really have done some of the things Luke accuses her of? Well, the pair seems intent on delving into to family secrets to find out.

This is an enjoyable suspenseful read. I was guessing until the end. The witty characters drew me in, and I didn't find a dull moment in this story. Looking for a great suspense and romantic read? Look no further than Family Business.