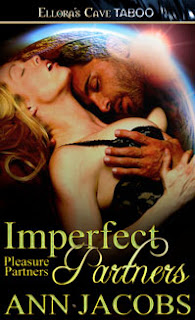 Book 4 in the Pleasure Partners series.

Mutilated and exiled from Earth because he helped his brother, former Star Commander Conan finds himself on the Pleasure Planet, Obsidion. Broken and humiliated, he dons the white robe that signifies his new status of complete eunuch—until a famed cyborg and sexbot maker restores his manhood with a large, unique…colorful appendage.

The friends who rescued Conan have found him a mate, Nebula. She, too, knows shame and the pitying stares of others, because she carries the dreaded mutant gene. She was sterilized by order of Earth Federation.

Nebula craves the touch of a real man, but thinks it is forever denied her. Conan is more than ready to satisfy her desires with his new bionic equipment, but he fears rejection. Two damaged people, yearning for what they have lost, seek fulfillment in each other’s arms.

Publisher’s Note: The books in the Pleasure Partners series originally comprised the Luna Ten Chronicles and Obsidion Chronicles series, and were previously published elsewhere. Each story has evolved through extensive lengthening and revision for Ellora’s Cave to make for a consistent and hopefully enjoyable reading experience. This book was previously published under the title Nebula.

Reader Advisory: The residents of this world revel in the public sharing of nudity and sexual acts. There is also a brief, very hot male/male sexual encounter.

Imperfect Partners by Ann Jacobs gave me the story I’ve been waiting to read since the first three. It’s amazing how imperfections make us doubt the very core of ourselves. I was outraged that a government had the right to emasculate men and strip women of their femininity.

Conan and Nebula deserved to find each other and to find a way to heal from their emotional and physical trauma. I felt they mirrored each other well. Two halves of one soul and their passion and ability to move forward moved me. The bionic equipment was genius as was the creator as well as the hormone patches and Conan’s will to illegally transport them for his mate, so that she may enjoy what’s been denied her. I can’t wait for the next book in this fabulous series built with remarkable and unforgettable characters.