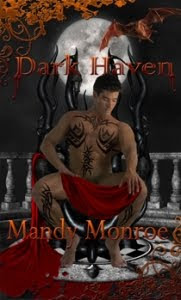 Dark Haven by Mandy Monroe has intriguing characters that keep you interested and reading. Practical and logical, Scarlett really needed all three different men to help crack the shell around her heart so that she could start feeling.

Nico, Vincent, and Lazarus all have something unique to bring to the relationship and Scarlett in turn helps each of them. The men have all been on earth a while so they have seen a lot of evil and each has their own story. Scarlett is like a breath of fresh air long overdue.

The love scenes are steamy hot. This is a great paranormal/erotic romance story with a lot of imagination put into the characters and their backgrounds. It was a definite page turner that was hard to put down. I enjoyed the interaction between Scarlett and her three alpha males, as well as the interaction between the secondary characters and Scarlett. It wouldn’t be a great paranormal without some evil to overcome and Elizabeth couldn’t get too much worse if she tried.

I read the alternate version of the story that contained some male on male action and hinted at more. I think it was done very well and that the parameters of the relationship between the three men, before and after they met Scarlett, warranted a little male on male action to help understand how close they had all become over the centuries.

I really enjoyed this story. It was fun, sexy and had a good plot. I hope that Mandy Monroe will revisit these characters in the future.