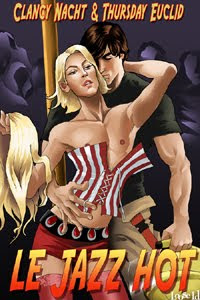 Handsome Julian Larson is a talented singer and dancer who performs in drag to make ends meet. So when his best friend needs a burlesque act at the last minute for a fireman's birthday party, he calls Julian. There, Julian dances for the birthday boy, Trent Fitzgerald; a too-good-to-be-true heartthrob who is too nice to keep a woman in his life.

Falling hard for the leggy, blond singer--but believing that she's a woman named Julia--Trent tracks Julian down to his apartment where Julian poses as "Julia's" twin in a desperate, doomed ploy to win over the sexy firefighter. When Trent inevitably uncovers the truth, will it mean the end of Julian's chances or a brand new opportunity?

This was one very hot story about awkward circumstances, assuming a costume, playing a role . . . and then betraying the illusion and ultimately being yourself.

It all begins with a budding Broadway star who moonlights as a cross-dressing burlesque dancer. When he falls in love with the birthday boy, an uber-macho yet sexually naïve fireman, things get awkward and amusing, before they finally get arousing.

It also helps that Julian is such a wonderful character, one who never set out to deceive the other man, but who loves the idea of being in love. He’s a man who loves the frills of femininity, but who is quite happy being a man.

Not the most realistic of romances, even with the cautionary touches, but a hot read that I thoroughly enjoyed.
Posted by Siren Book Reviews at 11:51 AM