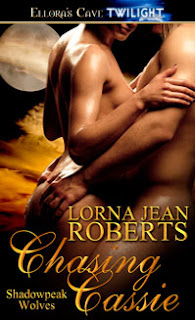 Cassie Callington has finally met a man who makes her insides quiver, her heartbeat race and her body sizzle. And he barely even knows she’s alive. An enforcer for the Shadowpeak pack, Jay Chance is ripped, sexy, a complete and utter hunk. He’s also out of her league and chasing after another woman. Still, there’s no rule that says she can’t look, right?

Except one night she finds herself doing more than looking, she’s touching, tasting, licking…yum. But it was never meant to be. He’s a werewolf and attracted to someone else. She’s a human and on the next bus out of town. Nope, it would never work. But Jay sees things differently, and comes after her, using some very sensual techniques to persuade her to see things his way. And to taste them his way, and to touch…

Chasing Cassie by Lorna Jean Roberts is one sexy thrilling read. Cassie underestimates who she is and her worth to those around her finding herself wanting what she thinks she’ll never have. Instead of opening herself up to the possibility she attempts to run. Danger is popping up around her; no one knows who the intended target is.

Jay is one sexy dominating male. He has his own demons to fight with wanting a human. He can’t stay away from Cassie and they’re thrust into an inferno charged affair. He aims for keeps though she is only in it for the now. With his pack under attack he has to make choices, ones Cassie is not understanding of the pack law. I found this read packed with emotions and the attempt to balance a relationship with two separate species and norms of society. I do wish I’d have learned more about the blonde stranger appearing and felt it was left unfinished. Hopefully there’ll be more about him in the next installment. This was one great read.