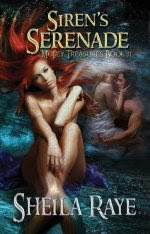 Love is enchantment without magic...

A mermaid’s instinct...Nissa of the Mer Clan is driven by her instincts to conceive a child, but her undersea cluster does not include males. She must transform into a human-like siren long enough to enchant a mate with her song. Then she can return to the sea. If she fails, she’ll die.

A playboy's desire...Peter McFey, hunky surf bum turned treasure hunter, has never turned down a sexy woman, but the sapphire-eyed siren wants to make him her pet.

In the sensual battle between a mermaid’s instinct and a playboy’s desire, there is no winner. When the siren sings, her mate can hear nothing else.

Enchantment will save her life but leave him...insane.

Siren’s Serenade is the kind of erotically beautiful fairy tale that I would have cherished as a secret treasure in my teenage years, and one that I probably appreciate even more with a bit of maturity behind me.

Here we have a beautiful sea creature, destined to remain a virgin until she destroys a mortal man with her siren’s song. The only problem is, the man she’s chosen seems to be immune to her song . . . but not to her charms. Nissa is a wonderful character, innocent in many ways (especially in understanding humans), but darkly seductive in others. As for Peter, he’s an interesting enough young man, but he doesn’t seem worthy of her attention. What’s more, his immunity to her song makes him a danger to her entire race.

What elevates this from simply fairy tale to paranormal romance is the quest that takes Nissa away from her home, joining Peter on an old-fashioned treasure hunt to save his captured brother. Constantly challenged by mortal conceits and the oddities of dry-land, she brings a measure of humour and heart to the story. Peter pales by comparison but, then again, I’m not sure any human cold have proven a worthy companion.

This is, as all fairy tales should be, a happily-ever-after tale with a twist. Well-written, romantic, and fun, it’s a great read all around.
Posted by Siren Book Reviews at 6:26 PM