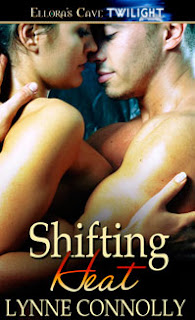 A book in the STORM world.

Andros was a severely disabled geek working for STORM but now he’s a powerful shape-shifting dragon. Still a geek though. Meeting Faye when they’re sharing the same air space is a bit of a shock they quickly overcome in a convenient hotel room. Hot, fast, rampant sex is just what Andros needs. Tangling with Faye between the sheets, against her desk, pretty much anywhere he can have her takes energy Andros now has in abundance. But he won’t let his emotions follow.

Faye never met anyone in her long life as exciting as Andros. But he works for STORM, Faye’s enemy. She’s never had anyone so young, either. But she can’t resist his strength, his determination—or his ripped body. Together they must hunt down a mutual enemy, but to defeat him they have to come to terms with what they are, were and will become.

Shifting Heat is part of the Storm Series. In this action packed story written by Lynn Connolly, we’re taken into the lives of Fae a misguided strong woman and Andros a young computer nerd. Fae whole-heartedly believes in her cause and acts impulsively on it. She sets out to seduce Andros. Her decision turns into a life altering course.

Andros still remembers himself as the cripple and not the strong man he’s become. Instead of embracing his new found gift, he still slaves away working on a program he’s waited years for to complete. Thrust into an assignment with the woman who seduced him and landed him in hot water leads them on a hunt for an immoral man. Fae and Andros passion and bond continue to grow despite their hazardous occupation.

Andros finds he must go undercover to trick those he’s aiming to find. Becoming the weak cripple again scares him to his core; he can’t risk losing what’s become important to him and gladly becomes the bait. Fae and Andros’ love for one another made me grin big. I only hoped the insanity happening to STORM, the agency he worked for, would resolve and the two sexy shifters could have their time together. I enjoyed this action and thriller packed read filled with fantastic cliff hangers. Up to the end I wasn’t sure what was going to happen and appreciated not having a predictable ending.