J.A. Saare, Dead, Undead, or Somewhere in Between 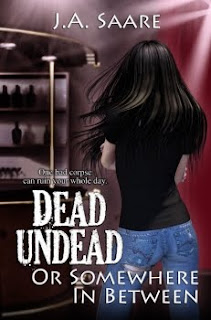 Title: Dead, Undead, or Somewhere in Between

(Book 1 of the Rhiannon’s Law Series)

One bad corpse can ruin your whole day.

No one knows that better than Rhiannon Murphy. She’s left behind the flash and sass of Miami for the no-nonsense groove of New York City, eager for a clean slate and a fresh start. A bartender by trade, a loud mouth by choice, and a necromancer by chance, she’s managed to keep her nifty talent hidden from those around her--until now.

The deliciously good-looking vampire Disco knows her secret, and when he strolls into her bar to solicit help investigating the mysterious disappearances of his kind from the city, she discovers he’s not the kind of person that appreciates the significance of the word no. But in a world where vampires peddle their blood as the latest and greatest drug of choice, it’s only a matter of time before the next big thing hits the market. Someone or something is killing vampires to steal their hearts, and unlike Rhiannon, this isn’t their first stroll around the undead block.

Vampire fans, don't miss this book! Having read many vampire genre stories, this book falls among the best of them. J.A. Saare manages to blend a touch of humour smoothly into the horror genre with a touch of sadness seamlessly. To me, this story was reminiscent of the Kim Harrison, Rachel Morgan series. This author has a similar talent for gentle touches of humour dabbled throughout her paranormal tale. With vampire names like Disco and Cash one just has to smile while reading this tale.

The only slight criticism, which in no way effects this story, would be that these are your standard vampires. I always look for some new trait in a vampire book and did not find one here. Some have talents, some don't, they drink blood both consensually and otherwise, they mark you, live in families and the place you've been bit becomes super sensitive. All traits that have been seen before. However, the story is an engaging, can't put it down type novel that will keep you up at night. In fact, as it ends with a new beginning, you will probably need to run right out and get the next book just to see what happens to Rhiannon next.

Rhiannon is a not too mild mannered bar keep. She just happens to see dead people. This rolls over into dead vampires which makes her a special commodity to the vampire community as that particular ability is extremely rare. Rhiannon, who was an abused child, wants nothing to do with Vamps as she believes that they are hard core killers. The story mentions a past friend that went missing in the company of a vamp, but no more is said in that vein. Because of this, she wants nothing to do with Cash and Disco, regardless of their amazing good looks and vamp pheromones. This story documents Rhiannon's slow acknowledgement that sometimes people need to choose the lesser of two evils. Occasionally, the lesser of evils can even turn out to be just what a girl needs!
Posted by Siren Book Reviews at 6:37 PM