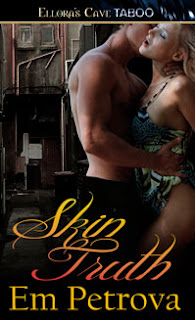 When Kat’s boyfriend takes her to an upscale restaurant, she’s certain he’s going to give her the two-carat princess cut she’s always dreamt of. Instead she finds herself being dumped. Thrown into a downward spiral, she ponders his claim that he’s looking for someone who needs him to take control so he can feel complete.

Driven by personal tragedy and determined that she can at least be adventurous between the sheets, Kat embarks on a sexual journey involving titillating phone sex and a growing obsession with the toy catalog. Soon she’s led into the darker world of bondage and whippings, only to be jumped by a group of men with a fascinating and fearless leader. Pushed to her limits, she struggles against the dark seduction. Until she discovers the leader’s secret.

Reader Advisory: Story contains a wee bit of forced sex—or is it?

Kat is an enigma, but after peeling apart the layers of her psyche totally relatable. My heart plummeted for her when her world came to a screeching halt. I could empathize with what was going on in her head and how she tried to wrap around the ‘whys’ in her head.

At the same time I felt horrible for her ex Dan who never intended to hurt her and sympathised with his reasoning in what he needed from his love interest. By breaking things off he gave her an opportunity to come out of her shell and acquire different tastes, a new way of life. Skin Truth was brilliantly named. I fully enjoyed the story, only not wanting it to end. I did find the moment of truth a bit predictable, however, it didn’t take away from the enjoyment of the story.