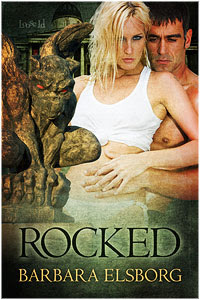 Desired by men and women, Eli’s good looks make sexual conquest easy until he attends a party at the Supernatural Museum, where they land him in deep trouble. He says no to the wrong women, and his punishment is to learn the ultimate meaning of loneliness.

Much to her family’s disappointment, not only is Pepper single but she works a hard and dirty job as an apprentice stonemason. Pepper loves bringing stone to life with her chisel but struggles with the isolation that comes with being different. Then there’s her attraction to her boss, Alessandro, who appears to prefer men. When Eli materializes out of nowhere, Pepper can hardly believe her eyes. Now she’s caught between a rock and a hard place.

His hands hardened by years training to become a master stonemason, Alessandro is an expert at his craft, but not in matters of the heart. A daily frustration when he’s in hopelessly in love with Pepper and the man of his dreams has disappeared. As Alessandro’s team begins to restore the Supernatural Museum, he, Pepper, and Eli are drawn into the building’s secrets and risk losing everything they hold dear.

Rocked by Barbara Elsborg is an interesting read. Pepper a young woman works as a stone mason apprentice for Alessandro, a man she is attracted to but doesn’t approach. Her twin sister and family don’t treat her kind. Upon chance she sees Eli who comes to life only inside buildings and returns to gargoyle statue when under the open sky. Alessandro thinks she’s mad, but that doesn’t stop him from pursuing her.

Eli can’t believe he’s stuck in stone or what happened to have him cursed. All he knows is his body hungers for satiation each time he awakens. His blood burns for Pepper and Alessandro if they’ll have him. He also itches to find the supernatural connection to the museum he normally perches on. With people out to take the statue back, Alessandro will find those in his employ he can’t trust.

The three of them find burning passion together and more while working together to make Eli a man once more. Pepper searches to find more about herself and what draws her to the unknown. The end of the story was surprising in a way that made me go hmm. Although I didn’t find the ending plausible it was still ad intriguing read.
Posted by Siren Book Reviews at 6:07 PM