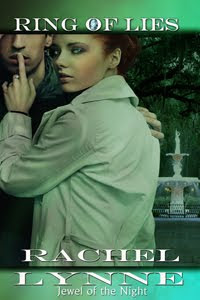 Jewel of the Night Series

A café owner and an ex-cop must unravel the mystery surrounding a hot blue diamond in order to stop a cold blooded killer.

After a childhood lived on the road with a free-spirited aunt, all café owner Ivy Michaels wants is a normal and uneventful life, but when her aunt is found floating in the Savannah River, Ivy inherits an heirloom blue diamond and a killer bent on keeping the past buried.

Dom Riordan is an ex-cop obsessed with finding his mother's killer. A chance meeting, and a glimpse of evidence he's been seeking, convinces him that Ivy Michaels is the key to solving the crime. Dom devises a plan to date Ivy and ferret out the truth but he didn't count on losing his heart. As a ruthless killer closes in on Ivy, Dom will risk everything to keep her safe.

Ring of Lies by Rachel Lynne was one in-depth read. Ivy is traumatized by the death of her one remaining relative, and is introduced to the possibility that her aunt was into some unsavoury behaviour linking a personal belonging to the brutal murder of her boyfriend’s mother.

In this web of deceit she must learn to use her mind to ferret out the truth and decide if the one person she’s known since childhood is a callous murderer, or if a string of events are coincidental, or if she is now the target of a cold hearted murderer. As the story developed I hope Dom would continue to be there for Ivy even if the outcome confirmed his worst fear.

This book is one I’d recommend to friends.

Posted by Siren Book Reviews at 10:24 AM