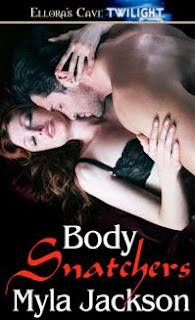 Elite Paranormal Investigative Agent Reggie Gallagher hates vampires. After thirteen beautiful women are kidnapped off the streets of Houston, Reggie and her sister set themselves up as bait to catch the kidnappers. The mission goes sour, her sister vanishes and Reggie is surrounded by a rabid pack of vampires only to be rescued by the most desirable vamp she’s ever encountered. Captivated by his incredible magnetism, Reggie can’t deny her body’s response to Yuri’s nearness. When the sexy beast insists on providing protection and assistance in finding the missing women, Reggie can’t refuse.

After the woman he loved turned Yuri Kovac into a vampire four hundred years ago, he swore he’d never trust another woman with his heart. Then he saves a sensuous hellcat from a band of vicious vampires only to find himself mesmerized by her curvaceous body, hot temper and fierce love for her family. Together, Yuri and Reggie seek Reggie’s missing sister and face down the evil behind the disappearances while fighting their growing attraction for each other.

Publisher’s Note: This story was previously published elsewhere under the title Tempting and has been revised for Ellora’s Cave.

Body Snatcher’s is a great read for any fans of vampire paranormal romance. The only reason I gave it four stones is because in the beginning of this novella the author’s writing is a bit unclear. This is a novella for adults and contains explicit language and sex scenes.

Despite that the cover is beautiful, the pacing is top notch, the plot is intriguing and the characters are feisty and engaging.

Agent Reggie Gallagher sets out to solve the mystery of the disappearance of thirteen women by setting herself, along with her sister up as bate. Reggie is thrust into an impossible situation when things don’t go according to plan. She finds herself partnering with Yuri, an ancient vampire that readers will find very appealing.

Still, one thing the author makes clear is that Reggie Gallagher hates vampires with a passion. When she finds herself attracted to him the result is incredibly entertaining.

Reggie tries to deny her attraction to Yuri but in the end, desire wins out. When she realizes this she proclaims, “Oh, fuck! I just had sex with a vampire?”

This is a wildly entertaining read for adults. Jackson sure knows how to create hot, vampire sex scenes.

Posted by Siren Book Reviews at 7:59 AM