Renee Field, Be My Vampire Tonight 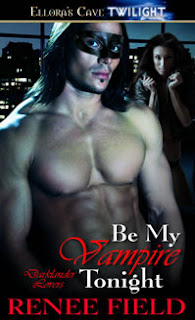 Title: Be My Vampire Tonight

Book one in the Darklander Lovers series.

Bidding on a masked man at an auction is all for a good cause, but what happens when he turns out to be a vampire who has the power to unleash the wild woman lying dormant inside you?

As a Darklander vampire, Mitch has spent a century living in a bleak world, but all that changes when he sees Tina. The beast living within Mitch wants to stake his claim. Mitch knows taking Tina’s virginity will change her forever, but try explaining that to a woman whose passion cannot be denied. Tina holds the key to his freedom, but Mitch will be damned forever before he turns her over as a slave for his master.

Be My Vampire Tonight was a good read. The setting with an otherworldly auction drew me to want to read the story. I enjoyed the obstacles that kept both Mitch and Tina from being together in the beginning, her rage at being stood up, his attempt to stave off the inevitable.

The passion when reached was red hot. I got lost a bit when she was no longer a mob bosses human daughter to an otherworldly. While I did enjoy the story the pause I took, going backward to see if I’d missed something pertinent took away the overall effect.

Thank you so much for the kind review and I truly appreciate the fact you went back to read certain parts. Again thanks.