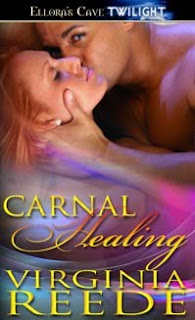 Leonore has always known she’s a witch—the direct descendent of the legendary Witch of Caernathen, whose power flowed from the sensual pleasures of sex. After years of searching, Lenore has found six women, each of whom has one of the magical gifts of their mutual ancestress. The circle of seven now prepares to perform the ritual that will restore all of them to the awesome power that is their birthright.

Dr. Jeff Carson thinks Leonore is only interested in a one-night stand. But he soon learns the mysterious woman is impossible to forget, and not only for the astonishing—and puzzling—sensations that he experiences during their lovemaking. For once, Leonore is having a hard time leaving a lover behind once she’s used him to restore her power.

Jeff and Leonore barely have time to explore their new connection when an ancient enemy appears. The Draíodóir, an order of sorcerers who will do anything to stop the ritual from happening, threaten not only Jeff and Leonore’s love, but their very lives.

The second element is that of romance and passion, leading to, dare we say it, true love. Leonore is a fantastic friend and a wonderful witch, but somewhat lacking in love. Her relationships with men are merely quick, nameless trysts, orchestrated to recharge her magical energies through orgasm. Jeff, on the other hand, is a dedicated doctor and a true romantic at heart. Not satisfied with being another nameless tryst, he pursues Leonore, who surprises herself by accepting an, unheard of for her, second date. Although their relationship is tentative and awkward at first, there are real sparks between them; the depth of their passion is such that it releases her magic to embrace them both, driving them to unheard of heights of sexual release.

The last element is that of magical warfare. Leonore and her sisters are witches, preparing for a ritual that will take them to England in order to renew their magic and realize the circle’s destiny. Opposing them is a legendary order of dark sorcerers known as the Draiodoir. Although the women doubt the existence of these mythical men, the presence of a dark stranger starts them wondering. Sadly, for all the set-up, there is only a brief exploration of this element, with Leonore battling her foe in the hospital parking garage. Their fight was exceptionally well done, and makes for some gripping drama. While the battle ends in a stalemate, it forces her to realise the full potential of her own power, and to accept the fact that Jeff is indeed her one true love.

As a romantic read, this was a wonderful story. Hopefully, there’s a sequel coming somewhere down the line, one that will resolve the magical storyline and continue that of true love.

Posted by Siren Book Reviews at 9:06 AM