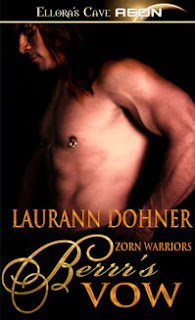 Kidnapped from Earth and transported to planet Zorn to be sold as a sex slave, Shanna is one angry, frightened woman ready to fight anyone who tries to touch her. Raised in foster care, she’s not going to take any crap off some alien men no matter how big, terrifying or muscular they are. Before she can be sold, she’s freed by a huge, sexy Zorn warrior…a warrior with the most beautiful blue eyes she’s ever seen. Shanna demands he take her under his protection when she realizes she’s stuck on Zorn.

Hyvin Berrr, the leader of Zorn, thinks humans are helpless and weak. Shanna decides to teach the big hunk he’s wrong by knocking him on his backside. He might think she’s playing but she’s trying to teach him a lesson. She’s not sure if she wants to fight her feelings for the sexy alien, though if a woman has to lose a battle, this just might be the one time to concede.

Who would have thought that being an alien sex slave could be so much fun! In Berrr's Vow I found an exciting, action packed romance waiting to happen! Don't tell human women we are weak, as Shanna proves to her protector.

I enjoyed the sassy humorous comebacks this pint sized heroine has! She has an attitude that gets her into hot water at times, but what a way to get wet! A well written tale that will have me looking for the rest of the Zorn Warrior Series!