Renee Field, Be My Warlock Tonight 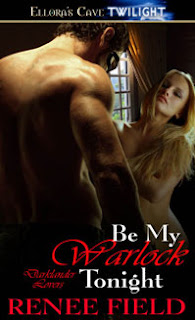 Title: Be My Warlock Tonight

Warlocks in Lance’s family have been cursed for generations. Revenge pumps in his veins along with his drive to succeed in the human corporate world. During a blind date with his coworker, he discovers she’s a witch belonging to the same family who cursed his.

Cindy fought to escape her gray Darklander world to prove herself in the human realm with her business smarts. She dresses down, doesn’t use her magic and is a force to be reckoned with.

Ignoring the sizzling passion her demanding warlock lover evokes in her might prove to be the hardest challenge in her life. But enjoying being controlled in the bedroom doesn’t mean she has to give up all she’s fought for.

Be My Warlock Tonight is the third in the Darklander stories continued in the auction house. At the same time this story gave me insight into the Darklander land itself with talk of covens, curses and law.

Cindy and Lance both had their work cut out for them. When Cindy found herself bespelled by a warlock, I was intrigued to see what would come of it. From there the story grew in depth, giving answers to the ‘curse’ and the way to break it. Lance and Cindy’s passion rocked. Add a fire breathing drakon and a witch in distress, that isn’t Cindy and it spells trouble, something which Lance wasn’t afraid of tackling. I enjoyed Sasha’s interaction in this story more so since she had more of a hand in it as Lance’s sister.

There were a few things that also drew me away from the story. I would have liked to see more individuality with Lance that set him apart from the other heroes and a smoother ending; it as well felt a bit rushed. I enjoyed the magic in this story and finding out more about the Darklander world with these two.