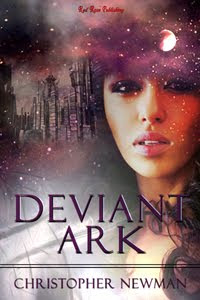 It is the near future and Earth has vastly changed. Political, social, and religious reforms have melded the vastness of humanity into one voice and world. Deviant Behavior isn't permitted. An underground movement has sprung up to free humanity from terrible persecution, blind prejudice, and false progression. Marlene Strombella, a native of the Mars Colony she hides her lesbian passions from the general public. She lives a lie, a false marriage, to avoid detection by the government. A starship of alien refugees has been granted political asylum from their home planet. Nicknamed "Dualies" for the tall, elegant aliens possess both set of genitals and are shunned by most humans. Marlene finds herself attracted to one of them. A willowy and elegant creature named C'est'a. She strives to come to grips with her fascination. But between her regular job, her role in the Resistance, and the "re-genderization" of her last lover Marlene cannot cope with it all. Does she have time to uncover the truth of her feelings for C'est'a, break through the distrust her would-be lover's race have for humans, and still carry out her covert operations? Or will Mars erupt into possible interstellar or inter-species war first?

Deviant Ark is one of the most near-perfect reads I’ve had the pleasure of enjoying in a very long while. I went into it with such high expectations that I was actually reluctant to begin reading it and risk disappointment. Much to my surprise, it fulfilled all of my expectations, and even presented a few wonderful surprises.

Much of the book revolves around the various conflicts between the ‘straight’ authorities, the ‘deviant’ human resistance, and the equally ‘deviant’ alien refugees of I’leana. In a future where the world has been homogenized under a single government and a single religion, deviance is not tolerated in any form. Gays and lesbians are hunted down, abducted, and forcibly ‘reconditioned,’ all broadcast live on TV as a form of state-sponsored entertainment. Meanwhile, the dual-gendered alien refugees are mocked as much for their gender as for their blue skin and pointed ears, confined to the worst human slums, and treated like slaves.

While a covert Martian resistance cell does exist, operating as much for political as for sexual reasons, they’re simply incapable of driving the kind of change needed to allow the ‘deviants’ to find acceptance. There’s a sense of hopelessness to their efforts, although you can’t help but admire their perseverance.

What holds the story together and provides us with hope is the budding relationship between Marlene and C'est'a. It’s a wonderfully awkward love affair, with Marlene unsure she can handle being attracted to a woman with a penis, and C’est’a exploring her first feelings for a human woman. Her parents are divided in their opinions of the relationship and end up presenting Marlene with a challenge to prove herself. It is through this challenge that Marlene not only wins their respect, but takes the first steps towards orchestrating cooperation between the resistance and the I’leana.

If the story has a failing – and it may have been intentional on the part of the author – it’s that morality is so closely tied to sexuality. With one or two minor exceptions, the ‘straight’ population is portrayed as a bastion of cruelty and negativity. Similarly, despite a few rough edges, the ‘deviant’ populations, both human and alien, are almost portrayed lovingly and positively.

Recommended for anybody with an interest in the human condition.

Posted by Siren Book Reviews at 8:35 AM