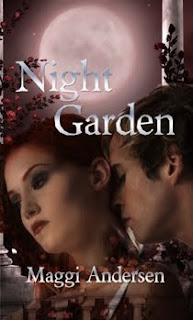 Laura Palmer marries the mysterious baron, Lord Nathaniel Lanyon, and goes to live in his ancient home in Cornwall. A dark cloud hovers over Wolfram. The death of Nathaniel’s first wife has never been solved, and some of the villagers believe him responsible. Struggling to understand the distant man she married, Laura tries to uncover the truth. With each stone unturned, she comes closer to danger.

A late 1800’s, early 1900’s style feminist woman, Laura Palmer, is married to a baron, the Lord Nathaniel Lanyon only after a few short weeks of meeting him. She moves from the art and learning centers of England, leaving behind her dreams of female emancipation, to the countryside of Cornwall. Once there, she realizes an unsolved mystery and danger surround the abbey of Wolfram. Laura must come to know her new life and husband, while solving the previous Baronesses’ mysterious death.

In Night Garden, the imagery of the early 20th century is well developed. The reader is transported to the turn of the century. We see inside the head of an erudite early twenties young woman with dreams for something more than a house and children. Being influenced by Laura’s bohemian Aunt has created conflict within the head of the main character. However, Laura Palmer is under pressure by her parents to conform to Victorian society’s many rules.

Maggi Andersen depicts the conflicting interests of a young woman who desires to be free, but winds up caught by her own desires quite well. The portraiture of entitled Victorian nobility is fully developed. It was hard to put the story down as the mystery kept just out of reach, drawing the reader in further to the storyline.

However, the storyline began with the tentative courtship of one blonde penniless Howard Farmer and the wealthy Laura Palmer. She presents an offer to bed him, as her first. This offends him, as he appears to be in love with her. Howard’s character is fully developed, and he is last seen leaving her home somewhat hurt in the rain.

This story is more mystery, and less of a sexual romance. Aside from a few scenes, it could almost receive a PG-13 rating. While the cover of the book is enticing, I would not say that that gentleman is the huge, towering, brooding, tall dark and handsome, thirty something, Lord Lanyon. The gentleman depicted appears to better fit the description of the missing Howard Farmer.

Night Garden was quite an enjoyable read and kept me up way too late into the night following the puzzle of Wolfram Abbey. I look forward to seeing more from Maggi Andersen.

Thank you for this great review Kayden. I'm pleased that you enjoyed it. Maggi