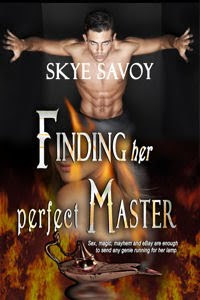 Sex, mayhem and magic are enough to send any genie running for her lamp

Normally, genies grant wishes but Cala Lowery, a 310-year-old half-blood jinn needs a few granted herself. If she doesn’t find a new master before the Queen of the Jinn finds her, she'll be auctioned off on eBay... again.

Cursed by the Queen for supposedly flirting with the King, Cala’s auctioned off to the highest bidder on eBay. Her luck fails again when her master trades her in. She’s thrust into the world of humans with dwindling magical abilities which often misfire. Cala begins a desperate search for a new master to regain her powers and avoid being listed on eBay for a second humiliating time.

Her new job as an Entertainment editor and mystery e-dater for a newspaper’s online dating site brings in plenty of candidates, gives her a taste of independence and reunites her with the victim of her one-time one-night-stand, Lee.

Lee forgives Cala for an incident with a leaky pepper spray can during their first meeting. Their relationship skyrockets until Cala finds herself struggling to keep her career and potential new master when someone tries to sabotage her column and expose her identity to Lee, who happens to have a secret identity himself.

What do a potato chip shaped like Texas, a vacuum sealed World Series hotdog and a genie have in common? They all have been sold on e-bay. So when Cala Lowery finds herself masterless, she has no choice but to prowl around for a new one, that or risk ending up back on the auction block. There are however some problems. One, she is only part genie so her magic is limited, and two she is not the type to wade out into the single world of casual sex and dating. When the chance to upgrade on the job front offers her the opportunity to search for a new master through an online dating service, she thinks things might just be looking up. That is until she discovers that the most disastrous and fulfilling one night stand she has ever had, is about to be her boss. Now not only does she have to make a deadline for work and find a new master before the queen of the genie puts her back on eBay, but she has to convince the man she loves that they really do belong together.

Skye Savoy has created a superb story of love, life and mystery that is certain to capture the imagination of the reader and keep them hooked from beginning to end. The characters are realistic and evoke feeling of complete relation as they mutter through the turmoil of everyday life, and the unique twist and turns of being something more.

This is a story of love, relationships, and the emotional roller coaster that accompanies both. It contains just the right amounts comedy, sex, frustration, turmoil and triumph to propel both the hero and heroin into the heart of the readers. I found myself laughing at the comical antics, and gritting my teeth at the arrogance of the unique array of characters Ms. Savoy has managed to bring together in a story that is certain to remain on my favourites list. This is easily a high recommendation read.

Posted by Kayden McLeod at 5:09 PM