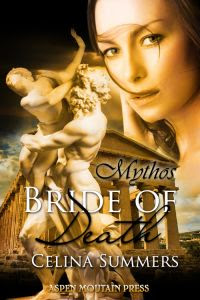 Genre: Romance
Page Count: 110 Pages
ISBN E-Book: 978-1-60168-279-6
Publisher: Aspen Mountain Press
Buy-Link: http://1romanceebooks.com/paranormal/bride-of-death/prod_1161.html
Reviewer: Kristin Manter
Blurb/Summary:
When the mischievous god of love targets Hades, the god of death falls hopelessly in love with the spring maiden Persephone, the one immortal most ill-suited for his dark domain. Her mother Demeter will never allow the Lord of the Underworld to court her beloved daughter. The king of the gods proposes an unconventional solution: Hades may kidnap Persephone and take her to the Underworld to woo her. If Persephone agrees to marry hades, Zeus will support the match. But neither god has reckoned on Demeter's inconsolable grief at the loss of her daughter. If Persephone is not returned to her, the goddess has vowed to destroy all life. Can Hades win Persephone's heart before her mother discovers who has taken her? Or will Persephone make her own wishes known as the intended bride of death? Even in the world of immortals, time is not on Hades' side.
Review:
Forget everything you ever thought you knew about Hades, and dive into the Underworld, with the refreshed eyes of a virginal maiden goddess. Loose yourself in Celina Summers captivating tale of the Bride of Death.

Celina's vivid descriptions of the gods, their duties and the realms they rule, will give you a crash course in Greek Mythology, leaving you begging for more.

The brooding and stoic Hades will kidnap your heart, much the same way he did Persephone as he reveals his tenderness and love, shedding the veil of solemnest he’d worn since becoming ruler of the dark realm.

Persephone, in all her innocence and youthful curiosity; transforms flawlessly from daughter of Demeter to Queen of the Underworld, and fulfils her new role with grace.

Hades' courtship of Persephone is romantic, even as the connection they share is overflowing with passion. The purity of his feelings for her, and her devotion to him remain profound even until the very end of the book.
Kudos to Aspen Mountain Press for the beautiful cover and near perfect editing, as it further enables the reader's enjoyment of Mythos: Bride of Death. I highly recommend this book and will come back to it again and again as a favourite read.
Posted by Kayden McLeod at 8:48 AM