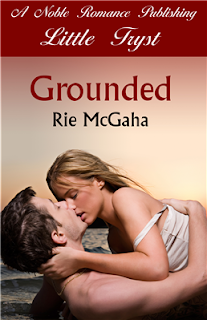 Rie McGaha...fantasy that keeps you up

Patty James is having a bad day. She's just lost her job, and to make matters worse, she's knocked on her butt by a couple of ill-mannered teens while on her way home from the office. As she struggles to deal with her scattered possessions, torn hose and broken high heel, who should stop to help her but a man whose looks would rival the Greek gods.

Dionysus, God of Wine and Revelry, is having a field day on Earth. There's nothing he can't have and nothing he enjoys more than wearing himself out with endless days and nights of debauchery. He never sleeps with the same woman twice, rarely stays in the same city more than a few days, and has no desire to change his lifestyle.

So why is he suddenly having a hard time keeping one little mortal female from invading his every waking thought?

Humorous. Sexy. Imaginative. Highly Entertaining. These are but a few of the adjectives that would appropriately describe Grounded.

Rie McGaha has perfected the art of bringing ancient Greek Gods, and making them contemporary and relevant. Watching the way Dion wrestles with the emotions, not just feelings Patty evokes in him, will amuse the reader almost as much as knowing that his own mother. Aurora is the composer who orchestrated the strings that are tugging at him.

Patty is innocent and naive, overwhelmed by Dion's godly beauty, and develops into his perfect soul mate. Patty never loses her distinctive sweetness, and compliments the otherworldly attributes and actions of the Greek deity who has possessed her mind, body, and soul perfectly.

The cover, although sensual, did not seem to really represent what I read. For this reason, along with an awkward layout, this Four Siren stone story received Three And A Half Siren Stones. Grounded is definitely a book worth recommending to others, and one that I will read again in the future.

Posted by Kayden McLeod at 4:33 PM

Thank you so much for the great review, even if I am tardy in saying so, Kristin! I really appreciate you taking the time to review this little nibble.
Rie McGaha