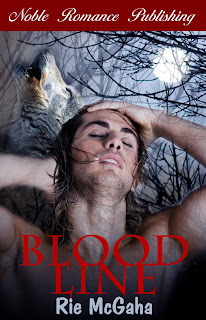 Rating: Three and A Half Siren Stones

Rie McGaha...fantasy that keeps you up

Truck driver Joshua Kaine and his wife, Jessie, enjoy the freedom of the open road, until the night Josh is attacked by a rabid dog. Josh kills the animal, but his and Jessie's troubles have only just begun.

Following the attack, Josh becomes deathly ill, but three weeks later he's feeling much better - much stronger - much more alive. When the moon rises full and bright, Josh experiences the change for the first time, his body morphing into that of a large, gray wolf. His appetite - for both food and sex - is enormous, and he spends every waking moment feeding his hunger.

Jessie doesn't know what's come over her husband, but she's not complaining. At least, not until a clan of werewolves comes after her and her family, intent upon seeking revenge for the death of their leader.

From a remote mountaintop to the swamps of Louisiana, Josh searches for a solution to their dilemma, but time is running out. When the absolute worst happens, Josh is forced to turn the tables and the hunted becomes the hunter.

Rie McGaha creates a realistic world of high action, and pure sexuality while giving us a new twist on the lore of the werewolf. Though her characters were realistic and familiar as your next door neighbour, there was an underlying thought that perhaps there was too much going on within the story, between an extremely wide range of characters. There were also points within the story that would have perhaps flowed easier for the reader with a bit more editing.

Over all this is an enjoyable story that contained all the elements needed to pull off a good paranormal romance, and keep the reader well entertained until the final page is turned.

Posted by Kayden McLeod at 9:15 AM

Thank you for the nice review of Blood Line. I really appreciate you taking the time.
Rie McGaha