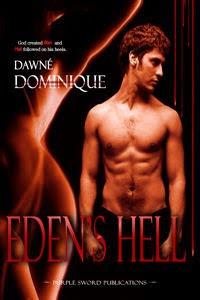 There must have been a beginning to the vampire race

In the beginning… God created man and called him Adam, a fine specimen replicated in his own image. He then created woman to ease Adam’s loneliness and named her Lillith. Unfortunately, God realized his mistake too late in giving woman free will, for she would rule her domain—not man.

When Lillith left Adam, God created another for his first-born son, and gave her the name Eve and a kingdom called Eden, but by then it was too late, for he’d unleashed Hell into the world of man

Ms. Dominique has created fascinatingly likeable, believable characters that move through a story as old as time, with a many exciting twists. I found her surprising turn of events to be well done, and the characters feelings, thoughts and actions to be a fascinating to read. This is a story worth every minute of engagement and is one I would not only recommend, but pick up again myself. The beginning of vampires, humans and a fight between good and evil that is epic in and of itself gets a whole new twist in Eden’s Hell that no one will expect. I know that I wasn’t disappointed.

Thank you so very much, Brigit. I'm so happy you enjoyed Eden's Hell. Dark Diary, which is Book II to my The First series, is scheduled for release in bookstores this June. I hope you get an opportunity to read it, too

Again, thank you from the bottom and top of my heart.

Ohhh...this isn't just any vampire story either...let me tell you.

Thanks, Lorrie. I wish I could say it was "new", but I've been working on this series for over five years. I just can't do anything easy! (teehee)

Again, thank you very much!

Dawne, you're a fabulous author and and amazing artist. On top of all that you're a wonderful person. How do you do it? (((hug)))