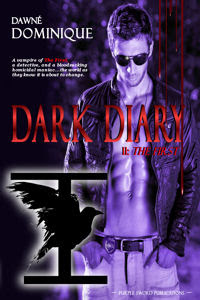 The lives of a deranged serial killer, a seven centuries First vampire and a City of Winnipeg police detective collide in this second novel of Dawné Dominique’s The First series.

Daniella Rolfe, a seven-century First vampire is unwittingly drawn together with a City of Winnipeg police detective, who happens to be investigating a string of some rather bizarre serial murders. It doesn’t take long for her to discover that this mere mortal man holds more power over her than any she's ever known.

Blood battles and broken vows are just the beginning of Daniella Rolfe’s woes.

Dark Diary, II: The First definitely lives up to its name. It is dark, some parts are disturbing, and some of the tale borders on horror. Not so disturbing that I couldn’t go to sleep, but if you are looking for a paranormal romance with a dark undercurrent and a thriller aspect then this is the book.

Dawn Dominique created a world with great characters and possibilities. She has her own version of a vampire and vampire powers. The story starts as if you are reading Daniella’s diary and then are sucked into her present life and happenings. It ends as a journal entry as well, reminding you that you were getting a glimpse of Daniella’s life.

Daniella Rolf, the heroine, is written as a strong and capable woman. You will feel her loneliness and isolation. Aiden Blackmore, the hero, is written as a friendly and loving man. Aiden brings some joy and much needed company to Daniella. The characters together make a nice balance and the chemistry between them sizzles off the pages.

Daniella and Aiden are brought together through a series of crimes. They are faced with stopping a serial killer before he strikes again. The serial killer brings a bit of mystery and thrill into the tale and keeps you on the edge of your seat.

Based on this story, I would check out other creations by Dawn Dominique.

Posted by Siren Book Reviews at 11:59 AM

Thank you for this review.

Your welcome! Thanks for sharing your story!