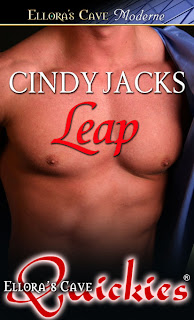 Just when Lila has resigned herself to the fact the most exciting chapters of her life are over, a blast from the past walks into her bakery. Six feet of gorgeousness named Gavin drops by as she’s closing up shop. They were once high-school sweethearts and it’s been more than twenty-five years since they’ve seen each other, but time hasn’t diminished the sweet heat between them. Soon enough the sparks—and the frosting—begin to fly.

As they rediscover each other’s bodies, it’s clear Gavin’s no longer a boy as he shows Lila the man and skillful lover he’s become. Though Lila knows this whirlwind romp could be an act of insanity, his touch unleashes the sensual woman she’s forgotten she could be. And she thinks—maybe—she has one more leap in her.

An Excerpt From: LEAP

Gavin followed her through the swinging door to the back. With a low whistle, he looked around the kitchen and asked, “Is this place all yours?”

She walked over to the Purposeless Cake and stared down at it. Pulling a box from beneath the worktable, she started to put it away, but then though better of it.

“Are you hungry?” asked Lila.

“Good.” She pulled a knife from a drawer, cut slabs of cake and served them up on heavy-duty ceramic plates. Gavin grabbed two stainless-steel forks from a gray plastic silverware tub to his right.

She handed him his plate.

“This looks great,” he said.

He shoveled a bite into his mouth and moaned. “Oh my God. This is— Damn.”

Pulling up two barstools, she sat and motioned for him to do the same. Lila studied him as he moved to take a seat. Taller, broader. Gavin had become fully a man. Though he was clean-shaven, she wondered what he’d look like with a beard. Could he grow one now? His dark hair led to about an inch or so of well-filled-out sideburns. Yeah, she was sure he could grow out his facial hair and he’d look pretty damn good if he did. Not that he didn’t look great as he was. The cropped, clean-cut look worked for him. A whisper of gray touched each of his temples and he wore that well too.

Her gaze wandered down his frame. No excess flesh or jutting bone. His tight musculature shifted his frame with ease. Clearly he took care of himself, worked out often. A picture of him shirtless in some imaginary gym, sweat dripping down a cut chest and abdomen, appeared in her mind’s eye. She blinked away the thought, trying to focus on his words and ignore the pounding of her heart. Her hand strayed to her matronly bun and the bobby pins holding it in place. She picked them out of her hair, one by one, and shook out her shoulder-length tresses.

“Mom said you’ve been at this location for the past ten years. I can see why,” said Gavin.

She cleared her throat. “Jack helped me set it up after we got divorced.”

“It was a pretty amicable split…as divorces go.”

“My ex, Irene, and I went through a pretty rough one a couple years ago.”

He took another bite of cake. “It’s all good now.”

Lila worked on her piece for a few minutes in comfortable silence and then asked, “Why did you come here tonight, Gavin?”

He glanced around the room and gave a little shake of his head. “To see you.”

“I get that. I mean what were you expecting from me?”

He rubbed his hand on the front of his jeans. “No expectations. It’s—it’s just good to be back. You’re part of my memories of home. I guess. No, I mean you are. Definitely.” He grunted and rolled his eyes. “I’ll stop rambling now.”

She let out an amused huff under her breath. “You’re fine.”

She slid her fork over her plate and scraped up the last of the frosting and crumbs. Her tongue darted over the fork tines and licked them clean.

Gavin reached out his hand. “You got a little chocolate…”

He brushed his thumb over her bottom lip. She let her tongue graze the tip of it. Shocked by her own audacity, she shied away from his touch but he cupped her face in one hand.

Eyelids lowered, Gavin leaned in. Dark lashes rested against his cheek. Warm lips skimmed across hers. The hand under her jaw slipped beneath her hair and cradled her neck. Lila’s body relaxed into the kiss, sliding her tongue over his. For a moment she lost herself in the scent and the taste of him—chocolate richness and the citrus undertones of his cologne, but all too soon, she remembered the shards of glass lodged in her heart. Pain at the memory of Alan’s departure stabbed at her.

“Maybe we shouldn’t be doing this,” she murmured.

“Maybe not.” He gave her a quick, soft kiss and then a longer, more urgent one.

Shouldn’t be doing this, Lila thought. A list of reasons she should rebuff his advances scrolled through her mind. She was still getting over Alan. She hadn’t seen Gavin in over twenty-five years. Jesus Christ, a quarter century. Nothing good ever came from rushing into sex. But who said they had to go that far? Well, she did want to fuck him. No denying that. But the last thing she needed was…was…?

The feel of his heated mouth against hers overrode her common sense. Oh, to hell with it. Why not?

Posted by Kayden McLeod at 6:00 AM