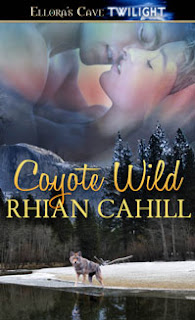 Brogan Wilder knows all about animal urges. As a coyote shifter, he’s lived with them all his life but he’s never experienced the bone-deep hunger Eloise Crawford elicits. Claiming a mate is one thing. Claiming one who’s human and has no idea shifters exist is another matter altogether. In El, he’s found his destiny. Now he just has to convince her they are meant to be together.

A visit to help her best friend with wedding plans seems like just the kind of relaxation El is after. But once she arrives, there’s nothing relaxing about the reaction she has to her friend’s brother. Suddenly her senses are on high alert and she’s drawn to him in a way she finds nothing short of terrifying. But there’s more to this man than his golden eyes and magical touch. There’s something else. Something not exactly human.

Accepting her fate should have been the difficult part, but when El finds herself the target of an outraged pack member, the true struggle begins.

Coyote Wild is a delightful paranormal shifter story. By the time I finished it, I was panting for more. My only complaint: I wish it was longer! I didn't want the story to end.

I fell in love with Brogan and his compassion. He made for a wonderful coyote shifting hero. The situation El found herself in, just by coming to visit her best friend who is getting married, and she accepts her fate well.

The cover is absolutely beautiful. This story is the second in the Coyote Hunger Series, but a first time read for me by this author. Though I can promise that it won't be the last. Rhian Cahill is an exceptional author who writes a fast paced, intriguing book.

Any reader who enjoys shifters should not miss Coyote Wild.