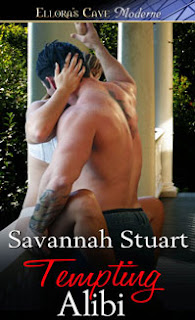 Scott got into a fair amount of trouble as a teenager, but now he’s grown and runs a respectable auto body shop. Unfortunately, the sheriff of his town has it out for him, no matter how much he’s cleaned up his act. When he’s accused of a crime he didn’t commit, no one is more surprised than he is when straitlaced Michaela Miller provides him with an alibi. An alibi that’s a complete lie. Determined to find out why his sexy next-door neighbor helped him out, he puts himself in danger of losing something he’d never considered. His heart.

The blurb for this sounded really intriguing. Former bad boy is accused of a crime he didn't do, his next door neighbor providing an alibi for him.

I didn't realize that the book was short, and there wasn't a lot of story. There were more sexual scenes than anything. Had it been longer, the story really could have been developed more. I really would have loved to see some more characterization and plot. There were times where it seemed that the character's lacked emotion.

That aside, the writing is well done. I would still like to check out more books by Savannah Stuart.