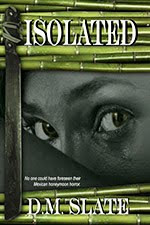 Tagline: No one could have foreseen their Mexican honeymoon horror

As Anthony and Jazmine embark on their honeymoon to southern Mexico, they have no idea the dark trail that’ll unfold before them. The couple signs up for an ATV tour and snorkel trip offered by their resort. Two days later Anthony stumbles out of the Mexican jungle bloodied, half dead and suffering from amnesia; he’s the prime suspect in Jazmine’s disappearance. Through his multiple interrogations, Anthony struggles to regain his memory in order clear his name and discover the whereabouts of his missing wife.

The international search for Jazmine reveals nothing and the F.B.I. are convinced that Anthony is involved, somehow. As bits and pieces of his memory return, he leads F.B.I. Special Agent Monroe on a trail of clues that implicate the couple’s ATV tour guides. Further investigation reveals that Jazmine has been sold to a drug-lord in Panama, and nothing will stop Anthony from trying to rescue her. As he enters the foreign country, the distraught husband only causes greater chaos.

With the F.B.I. in fast pursuit to Panama, the race against the clock begins. When the authorities close in on the suspect’s house hoping to recover Jazmine, a grueling discovery is made; Anthony is already at the house. As the case comes to a close, Anthony is shocked to discover that this wasn’t a random crime.

First and foremost, it will take weeks to get the cramps out of my feet from curling my toes in fear and anticipation thanks to D.M Slate!

To be in a situation where you are separated from your loved one, just after being married, and being made to wonder if the other is alive made my heart race. And then to add to that, the fact that there is an FBI agent hell-bent on believing one of them is to blame for the other’s disappearance.

And that is only half of it! D.M. has put many twists and turns in this road of mystery and intrigue that by the time the story ends, you don’t know what to think. This is one twisted read that will make you want to never go on vacation again!